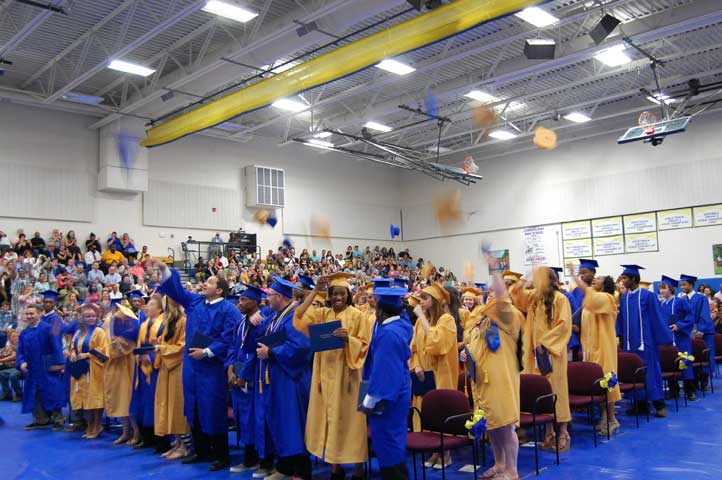 Mortarboards arced through the air with abandon as the Cumberland County Class of 2015 celebrated their hard-earned triumph. (Photo by Kaitlin O’Brien)

CUMBERLAND — “The best is yet to come, and won’t that be fine? You think you’ve seen the sun, but you ain’t seen it shine.” Frank Sinatra popularized “The Best is Yet to Come” in 1964, and the legendary singer’s promise continued to work its way into speeches and hearts at Cumberland County High School’s 2015 graduation ceremony held on May 22.

The high school gym buzzed with the electric excitement of friends and family anticipating the arrival of their students. Accompanied by applause, cheers and the familiar strains of “Pomp and Circumstance,” graduates in blue and gold robes filed in and took their seats. This night belonged to them.

In his welcome address to the crowd, graduating senior Brenton Morris informed everyone that it was time to say goodbye. However, he said the class should do so with smiles on their faces for they “are more than qualified to be successful in whichever direction [they] travel, conquering any hardship to come [their] way.”

This confidence ultimately stems, Morris said, from the teachers and faculty of Cumberland County schools, parents, friends, and community members who have helped to prepare students for the continuance of their journey.

Valedictorian Wyatt Salinas delivered a speech filled with heart, humor and a few lines of Beyoncé to drive his points home.

Salinas explained that, according to the “Queen Bee” herself, “If everything was perfect, you would never learn and you would never grow.” With a GPA of 4.5 and plans to study engineering at Virginia Tech in the fall, Salinas credited his mother for encouraging him to expand his knowledge and push himself.

Salinas also made certain that his fellow graduates were aware that they should exit the stage “to the left, to the left” once they received their diplomas.

Salutatorian Ross Fillman urged his classmates to remain true to themselves as they progress on their paths through life, and to simply “be happy with what you have and be proud of how you got there.”

Regardless of the setbacks students are certain to confront in life, Fillman ardently pushed that anything can be overcome. Having faced a physical injury that made his goal of becoming a competitive swimmer unattainable, he proudly announced that he overcame that obstacle through hard work, which has enabled him to attend the University of Virginia in the fall.

“We each take our own path, we each have different talents,” Fillman said, “and if you put your talents to the best use possible, what can’t you do?”

Keynote speaker W. Taylor Reveley IV, 26th President of Longwood University, took students on a brief tour of local history to demonstrate how students themselves can change the course of history.

Citing the example of Barbara Johns, “a high school student right here in the heart of Virginia,” he expressed to the graduates how history was forever changed here “barely more than a generation ago” and how it is possible for even young students, those just getting started, to make a monumental impact on the world around them.

“History fills our lives with colors and dimensions that are otherwise missing,” Reveley said. “It inspires us with reminders of what individuals can accomplish, but also humbles us with an appreciation for the power of historical forces to shape our lives.”

President Reveley then spoke about the power of this generation to affect change. These graduates, he claimed, face a harder future than previous generations. But with those hardships, he expressed, comes the opportunity to really make a difference, to really matter.

In his closing comments to the class, Reveley imparted to students that “fresh starts are hard-won and rare in life.”

“Starting right now,” he instructed, “begin to become whoever you have the courage to become.”

“But one thing remains the same for us all,” he said. “The best is yet to come.”

First meeting of the year held 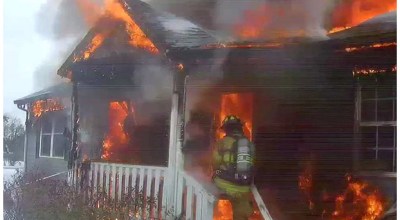