HAMPDEN-SYDNEY — Fifth District Congressman Robert Hurt initially approached Hampden-Sydney College’s invitation to speak at commencement as if it were a large, prickly cactus.

He was unsure whether to touch it.

First, as a member of H-SC’s class of 1991, he knew there were those on campus who could recall his academic track record.

“I was not, and am not, convinced that I am nearly distinguished enough to be honored with this task. Many of the professors that taught me are still here today, and many of them may have had the same feeling when they learned that I had accepted this invitation,” he said good-naturedly.

And then, of course, the former Virginia State Senator is a member of a legislative body that is not universally loved in America. Elected to Congress in 2010, Hurt quoted late night talk show host Jimmy Kimmel’s quip that “a new poll shows that disapproval of Congress is at an all-time high. Eighty-two percent of Americans disapprove of the job congress is doing and the other 18 percent weren’t home when the question was asked.”

Furthermore, drifting back to his own graduation day, Hurt knew the audience would be a tough one.

“…Honestly folks, I don’t remember one thing our commencement speaker said—and, in fairness,” he admitted during Sunday’s commencement exercise, “I doubt many who sit through a graduation ceremony do.”

But then he thought about what his alma mater meant, and means, to him.

As that turned around in his mind, he knew the invitation was an offer he couldn’t refuse.

“I realized that this opportunity amounted to more than just the delivery of a speech that may or may not be remembered 25 years from now. In fact,” the 45-year-old explained to graduates, “it is an opportunity—if not an obligation—to take a few minutes to salute this great institution.”

A liberal arts education, said the man who began his political career on Chatham’s town council, uses history, literature, philosophy, rhetoric, math and science to provide an underlying understanding “in not just what to think, but how to think.”

As they head toward the college’s gates, the congressman said, it is appropriate that graduates consider what it means to be a good citizen, using their ability to think to help the nation meet its very real challenges.

“At home we face the challenges of unsustainable debt and deficits and a sluggish economic recovery that requires us to re-examine the proper size and scope of government,” the Republican said. “We face the challenges of a society where our family structures have broken down and where a dismal percentage of our citizens don’t even participate in our election process.”

Then there is the remainder of the globe.

“Abroad, the challenges are equally daunting—whether it is the prospect of a nuclear Iran or of a meltdown in Ukraine,” Hurt said.

Citizenship is no spectator sport, the father of three advised.

The nation’s founders, like the trustees who formed H-SC, knew that the importance of education was more than academic and that good citizens would have to do more than simply learn and understand the foundational principles of America.

“Good citizens would have to defend them,” the congressman said, “and they would even have to die for them.”

The journey is not one that stretches across gently rolling land. There are mountains and deep valleys.

“The civic obligations required in a free society are not easy, but with good citizens that are educated and engaged,” he affirmed, “our Founders knew, and I believe, that the greatest challenges facing our nation can be met and that they will be met.

“This great country,” Hurt told them, “is depending on you.” 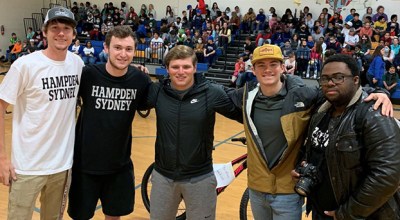