Portman Inducted Into Hall Of Fame Over Weekend 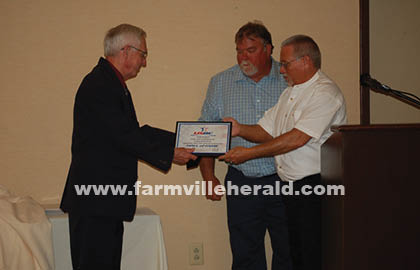 LYNCHBURG — P.J. Portman, of Farmville, was honored on Saturday, May 16, as one of two new inductees of the Lynchburg Area USBC Bowling Association (LAUSBC) Hall of Fame.

The accomplishment is not one that comes easily. Portman had to first be nominated by a USBC (United States Bowling Congress) member; one that believes Portman's bowling career is superior in performance. The nomination then went in front of the LAUSBC Hall of Fame committee for review, where they would vote on whether the nominated bowler would be inducted or not. With his career statistics, there was no question if Portman was qualified to be considered for the honor. In his lifetime, Portman has bowled (52) 300 games and shot (32) 800 series. Even shoulder surgery on his dominant bowling arm in the last year could not stop Portman from excelling in bowling. Two of his 300 games and two of his 800 series were bowled after he recovered from that surgery.

“This award has been long-awaited and now it is finally achieved,” Portman reflected on the event. “As you can see, as with any endeavor, I was only a small cog in the wheel. I have been blessed with a support group from many arenas.”