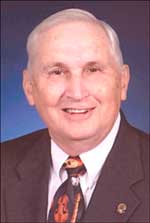 NORTH CHESTERFIELD, May 14 — Earl Ray Pitt, 83, passed away of cancer surrounded by his entire family on Saturday, May 9, 2015.

Mr. Pitt was a graduate of the University of Tennessee with a degree in Animal Husbandry. He then worked as a cowboy in Missouri and Illinois. He moved south again to work with Southern States Cooperative for almost 30 years. Mr. Pitt was the horse feed specialist with the Central Office in Richmond. His final work years were with Agway, Inc. In retirement he realized a life long dream of owning a horse farm in Cumberland where he was active in church work, the Ruritans, the VA Horse Council, trail riding and golfing.

After 20 years he moved back to N. Chesterfield. He loved horses, civil war history, western movies and the Washington Nationals baseball team. He was a dedicated family man who never met a stranger and loved to make new friends.

The family will receive friends from 6 to 8 p.m. on Sunday May 17, at the Huguenot Chapel of Woody Funeral Home.

A memorial service will be held at 11 a.m. on Monday, May 18, at Mt. Pisgah United Methodist Church, 1100 Mount Pisgah Drive, Midlothian, VA 23113. At a later date he will be interred at Mt. Olive Cemetery in Dyer, TN where he was born and raised. Donations may be made to The American Cancer Society.

Woody Funeral Home, Richmond, is in charge of arrangements. Condolences at: www.woodyfuneralhomehuguenot.com