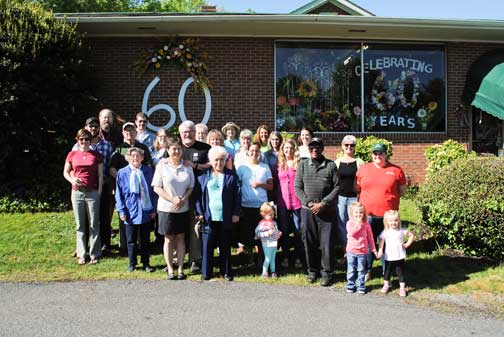 Over the past 60 years many people have been a part of Carter’s Flower Shop. This group gathered at the shop during the Heart of Virginia Festival for a photo. The official anniversary celebration will be held at Carter’s on Saturday, May 9, and the community is invited. (Photo by Rob Chapman.)

The floral industry has a slogan: “Say it with Flowers.” A successful florist would add — “Say It with Love.” Willie and Gray Carter, who opened Carter’s Flower Shop in Farmville in 1955, had a business plan based on that four-letter word — their goal was to share their love of flowers with the community.

Many former employees and business owners plan to attend the anniversary event set for Saturday, May 9, from 1 to 5 p.m.

“I was a little girl when my Daddy left a very secure job at the First National Bank to pursue a dream of owning his own business,” stated Celia Carter Banks, daughter of Willie and Gray Carter. “My Daddy’s practical side and his love for business was a perfect fit for the gracious and creative side of my Mother.

Mrs. Carter was part of the garden club movement that began at the end of World War II. Garden clubs were organized in the post-World War II era for a reason. New homes were popping up all over town — homes with yards that needed landscaping.

“We didn’t know what to do with our yards,” recalled Nancye Noel, member of one of the original clubs in town.

The Nora Lancaster Club and the Weyanoke Club, were both organized in her living room in April of 1952.

“After the war there were a lot of new families and new homes,” Noel added. “My husband and I built our house in Farmville in 1951, and everybody I knew was in the same process.”

Another local club, the Gray Carter Garden Club was organized in 1966. It was named for its founder, the owner of Carter’s Flower Shop.

The Gray Carter yearbook noted:  “Gray Carter loved all outdoors. She took great pride in her floral business and each arrangement. Flowers were her children, and she saw beauty in each as an individual.”

“One of the loveliest gifts from my mother to all of us was her love for flowers,” Carter’s daughter continued. “She loved to arrange them in containers and she loved to plant them in our yard. She totally transformed the wooded lot next to our house into her own wonderland of meandering paths surrounded by thousands of yellow jonquils and beautiful azaleas.”

Mrs. Carter shared gifts with the community as well.

“My mother was a giver and her favorite gift to give was flowers,” her daughter noted. “I remember how she would send Arthur, a faithful employee, out on daily deliveries with little bouquets of flowers to people that she wanted to cheer up or to those who were celebrating something special. This was her gracious way of blessing and extending love in our community.”

“Mr. Carter continued the flower shop until he decided to sell in 1984,” another former owner Anne Nase Wilkins related. “My husband and his good friend Ned Stimpson decided that this was the perfect business for their two wives to buy. Everyone knows that a flower shop is the perfect hobby business, especially for two energetic women looking for something to do! Helen and I took a job (running a flower shop) that our husbands figured would have each of us working three days a week. We both worked six or seven days a week.”

Anne Nase and Helen Stimpson bought Carter’s Flower Shop and quickly learned that it was not an easy business to manage.

“Before computers it was chaotic,” Wilkins related. “We went through three bookkeepers in less than two years. Bookkeepers did not seem to understand that they were expected to be cryptologists in deciphering handwriting and symbols on orders and then tracking down the designer who filled the order to get a correct charge.”

The business flourished under the ownership of Nase and Stimpson. They paid off their bank loan in record time and even thought about opening a second shop.

“It’s a good thing we decided against this expansion,” Wilkins related. “As our lives changed, so did our attitudes towards the business.”

“I found that after several years the business was no longer bringing me joy,” she related.

Fortunately Carolyn Jones, who came to Carter’s in 1986, was ready to step into the ownership role.

“Anne and I became partners in the business, and when Anne decided to retire I had to buy it,” Jones said.

“Carolyn always said that our emphasis should always be on the flowers, and she was correct,” the former owner added.

While ownership changed at Carter’s, the company’s trademark love of flowers did not.

“My grandmother had a great love of flowers, and that was instilled in me at an early age,” Jones related. “I started at Hillsman Florist in Amelia at the age of 14, giving my services for free,” she noted. “Mrs. Hillsman finally decided to pay me and I worked there all through high school. When I graduated I went to Hixon’s Design School in Lakewood, OH, where I received certification.”

Jones later received the Designer of the Year Award for the State of Virginia, her former partner noted.

“It gets in your blood,” Jones noted of her floral business. “It’s more than a job.”

It is also a job that requires extra hours.

“Our business phone forwards to my cell phone,” she related. “I don’t know how many times on Sunday I’ve had a call — ‘I forgot to order flowers, and I need something for my mom’s service.’ You get in the car and go — because it’s important.”

Jones credits her husband Richard who is her bookkeeper and the Carter employees with the continued success of the business.

“It’s really a group effort,” Jones added. “I could make the most beautiful arrangement there ever was, and if Arthur didn’t get it there in the same shape, I would look bad.”

Arthur Watson, who still delivers flowers for Carter’s, remembers deliveries being made by bicycle in the early days.

“It’s a pleasant job,” he stated. “People feel good when they get flowers — you get to make their day.”

“I’ve worked at Carter’s since I was a 17-year-old senior at Randolph-Henry High School,” Sally Pyle added. “Since then I have celebrated many milestones, such as graduating high school, going to college, getting married, having my first child, and losing a loved one. In experiencing all of this I have been able to better connect with our customers.”

Sharing with the community is still a part of Carter’s philosophy. For the past 20 years, donations collected on Good Neighbor Day have contributed to community organizations such as Meals on Wheels, Habit for Humanity, FACES Food Pantry, and local fire and rescue squads.

Experience, service, and love — what better way to “Say It with Flowers.” 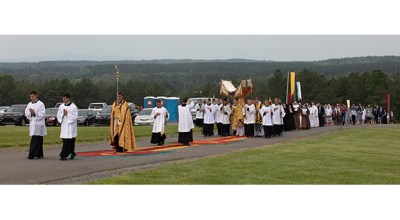 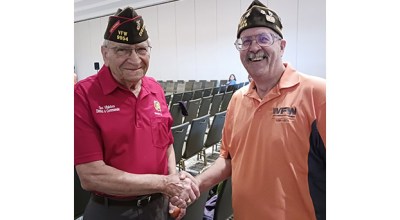 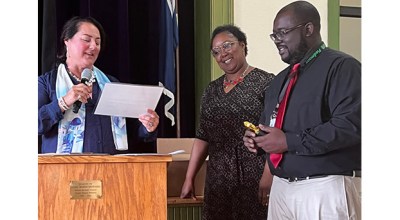