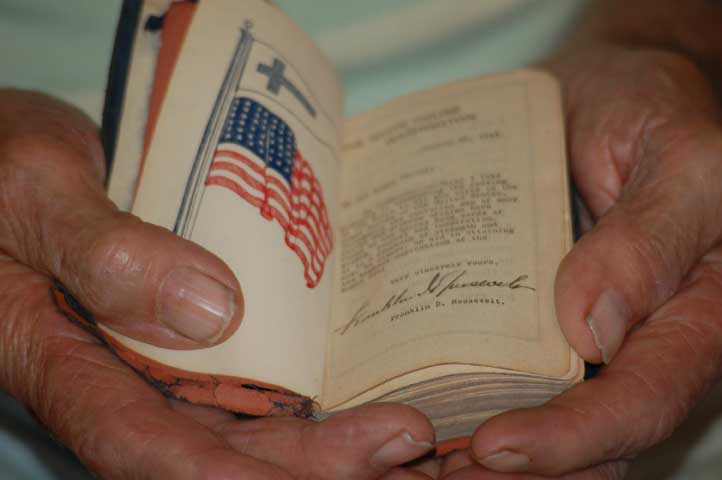 World War II veteran, Hugh Earl Allen, of Farmville, holds a Gideon Testament signed by President Franklin D. Roosevelt. The 93-year-old Allen, who joined the Navy on July 4, 1942, carried the Testament in his pocket during the invasion of Normandy on D-Day. (Photo by Marge Swayne.)

Memorial Day honors and remembers those who died in service to their country. World War II veteran Hugh Earl Allen, of Farmville, doesn’t need any reminders. Every day is Memorial Day for this 93-year-old survivor of D-Day. From Normandy’s beaches to Pearl Harbor, Allen was there. Along the way, he logged the action in a Gideon Testament that he carried in his pocket.

On July 4, 1942, Allen was in a group of enlistees that marched down Broad Street in Richmond to board a Norfolk & Western train for boot camp.

“When we got on that train to Norfolk, they gave us a Testament,” Allen recalled.

His contains a note and personal signature from Franklin D. Roosevelt. It is a keepsake that Allen still treasures.

“Everything that happened, I wrote it all down in the back of the New Testament,” he added.

“All of us that signed up that day were Lee Volunteers,” he related. “We were signed up as amphibians — to support any way we could with an invasion.”

From boot camp Allen was sent to New York.

The crossing from New York to Gibraltar took 30 days.

USS LST 316, commissioned in October 1942, made the crossing at a maximum speed of nine knots.

“The ship I was on, the air tube going from the clutch to the engine broke in two,” reported Allen, a Boatswain’s Mate. “There were 30 LSTs together going over the Med. We lost all of the convoy and never did catch up.”

The ship’s first port of call was Anzio, 50 kilometers south of Rome.

“We tied up in Anzio and a German plane came over,” Allen related. “There was a big pile of two-inch pipes on the dock with two Marines watching it — why I don’t know. The German plane dropped a bomb right in the pile of pipes. Then it came around on our ship and strafed it.”

As Allen continued to log events in his Testament, the ship went to Sicily.

“We invaded the island,” he noted. “We had tanks, half tracks and we had jeeps and DUKWs (colloquially known as DUCKs, amphibious trucks). The cruiser Boise was sitting right behind us, and as we started to unload three or four German tanks came out and set up so they could shoot at us. The Boise started shooting at them and hit, one, two, three, four — right down the row. They took them all out!”

Following that encounter the ship sat for 30 days.

Next was the invasion of Sardinia and a near miss from a depth charge.

“We went from there to Mt. Vesuvius,” he related. “They were having trouble with Germans up on Mt. Vesuvius. They wanted some half tracks to get ‘em out, so we carried them up and unloaded them.”

All of these events, as it turned out, were practice for a more challenging assignment to come — the D-Day invasion of Normandy.

“We went to Ireland to get the ship ready,” he recalled. “They put different guns on the ship. Where we had a single 40 up on the bow, they put a quad 40. On the fantail they put a quad 40 and 20-millimeter guns along the sides.”

Loaded with tanks and jeeps, USS LST-316 was assigned a lead spot in the invasion.

“They told us before we went across the channel that the first 25 waves would be wiped out altogether,” Allen related. “And we were in the first 25.”

“We were loaded with tanks and all kinds of things,” Allen recalled. “It was so rough the screws (propellers) would come up out of the water and shake the ship. When we got to Normandy it was so rough we turned around and went back.”

“We got there just about light,” he said. “We pulled in and something was messed up, sure enough. We were too far out — the water was too deep. We started to unload. The jeeps and DUKWs went right off the front of the ship — and straight down with six men. At least 36 men went down with their jeeps, loaded with gear and all. I only saw one floating in the water in a life vest, but his head was down in the water. He was dead.”

“It was a shame,” Allen stated.

Following the invasion, Allen’s ship returned to England for more supplies but had difficulty getting off the beach.

“The other four ships with us went on — we caught up to them halfway across the channel,” Allen continued. “About that time a German sub torpedoed two of the LSTs. There was three of us left out of the five. All together, we made 20 trips across the channel carrying supplies.”

After the D-Day invasion Allen returned to the states to pick another ship, USS LST-969.

“We left Brooklyn and went straight south to the equator to the Gulf of Mexico to the Panama Canal and on over to San Diego,” Allen reported.

From there Allen’s ship went to Pearl Harbor.

“When we pulled into Pearl Harbor, we could see the battleship Arizona all burned out from the Japanese bombings,” he related.

After three weeks in Pearl Harbor, LST-969 was sent back to San Diego to be refitted to carry troops.

“We were sitting in San Diego when they signed the papers on the Missouri,” Allen recalled.

The war was over, and on Dec. 7, 1945, four years after the Japanese attack on Pearl Harbor, Allen was discharged from the Navy.

Allen returned to the family farm in Prince Edward County where he still lives with his wife of 68 years, the former Jessie Wilkerson. He cashed in a government insurance policy for $600 and built a six-room house.

“We cut timber off the place, and my father and I built the house with a full basement for $600,” Allen related.

The World War II veteran considers himself blessed to be among those who came home. In no small part, he credits the Testament he carried.

“It’s been a wonderful life,” Allen said of his wife, six children, and many grandchildren. “I’ve been well blessed.”

President Roosevelt’s note in Allen’s testament states: “As Commander-in-Chief I take pleasure in commending the reading of the Bible to all who serve. It is a fountain of strength and now, as always, an aid in attaining the highest aspirations of the human soul.”

Roosevelt’s message was and is a testament to the American spirit.

Hugh Earl Allen can tell you as much. He carried the words in his pocket, and 70 years later they remain in his soul.