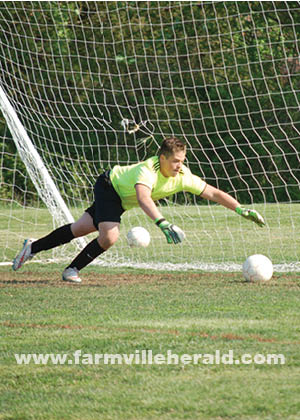 With the tie, the Falcons improve to 1-1-1 in their season.

“We put a number of shots out, I'd say around 10-14, and kept the ball possession-wise most of the game. My team did well coming back with a high energy against a team we previously lost to and we did well with my newly implemented system,” remarked Fuqua School varsity soccer coach Chase Morrison.

Earlier in their season, the Falcons lost their only loss to the Gators on Monday, March 23, with a 4-2 score.

Morrison went on to say, “I am very, very pleased with how we kept the ball and didn't force things at times, and showed maturity with patience for some plays. Defensively, we made some poor errors. Four, to be exact. In the current state, I am disappointed with these faults.”

During the match Arham Ali led the Falcons with a hat trick, while Jalen Patteson followed with a goal to aid the Fuqua team.

Morrison went on to reflect on his team's errors and season thus far, saying, “For the future, these (errors) are very fixable things and next year will reflect all the hard work that is being put in right now. Our mistakes are very, very fixable. We are doing the hard parts very well at the moment. It is the easy things we are getting halts from stopping our progress. With more practice, chemistry, and professionalism, we will continue to rise and promote strength in our team fixing these simple errors.”

The Falcons varsity soccer team will return to action on Friday, May 1, when they visit Quantico High School at 6 p.m. for a game against the Warriors. Fuqua will only have two more games left in their season after their May 1 matchup. They will host Quantico on Friday, May 8, at 4:30 p.m. and then they will travel to The Carmel School on Tuesday, May 12, for a 4:30 p.m. game against the Wildcats.

“We have a few games left to end the season on a winning record and a good note. Again, I'm walking away from the (Greenbrier) game with a bit of salt. Disappointed that we couldn't capitalize and walk away, with what should have been an easy win, but very excited for what is still in store for my team and the whole program,” Morrison ended.