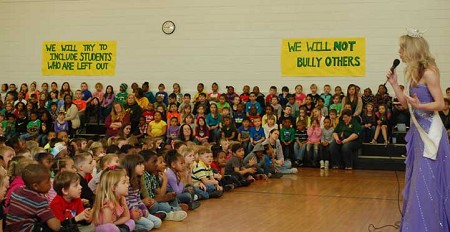 BUCKINGHAM — The national statistics are as overwhelming as a bully’s words when he or she taunts someone because of their clothes, height, or age.

Over 70 percent of young people nationwide say that they have seen bullying in their schools, according to data from the U.S. Department of Health and Human Resources. In one study, according to stopbullying.gov, about 49 percent of children in grades four through 12 reported being bullied by other students at school at least once during the past month, whereas 30.8 percent reported bullying others during that time.

As towering as the figures are, teachers, staff, and students of Buckingham County’s primary, elementary, and middle schools are seeking to overpower them with kindness, compassion, and leadership through implementation of the Olweus Bullying Prevention Program (OBPP).

According to its website, the program was developed by Dr. Dan Olweus of Norway, and has over 35 years of research behind it. The evidenced-based program has been adopted by schools worldwide, and seeks to reduce existing bullying problems among students, to prevent the development of new bullying problems, and to achieve better peer relations at school.

“She had power over me,” said Primary School Principal Pennie Allen during the program’s kick-off assembly, describing her experience of being bullied on the school bus as a student. Allen said her bully made fun of her and her family. “I just didn’t do anything,” she told the audience of kindergarteners and first and second graders. “I should have told my mom or dad.”

According to OBPP’s website, the program addresses several forms of bullying, including verbal, through social exclusion or isolation, physical, through lies and false rumors, racial, sexual, and cyber bullying.

During the elementary school’s kick-off session, Principal Cindy O’Brien emphasized the importance of student’s being happy when they enter and leave school each day, and the strong hindrance that bullying can cause to that feeling.

Pamplin-native Courtney Garrett, the reigning Miss Virginia 2014, who was the keynote speaker at both of the schools assemblies, explained the importance of possessing good character, and making choices that prevent bullying in schools and classrooms.

Garrett related that her brother, who was diagnosed with cerebral palsy as a child, was bullied and made fun of in school. Posing questions to the students while wearing her gown and tiara, she evoked a strong distaste for what her brother endured from his fellow students.

Division Superintendent Dr. Cecil Snead told the newspaper that the division has been taking a gradual approach “in working the program from the primary and elementary schools up through the middle [school]…Then the high school, being a different animal, they’re working through taking the Olweus approach and integrating it with an approach that they’ve developed over the past year.”

On his hopes and outcomes and goals of the program, Snead noted: “What we felt like we needed was a solid, research-based understanding of what…bullying is. And, to make sure that we’re actually addressing the problems correctly as they arise, or the challenges that arise, in order to ensure that our students feel safe and secure…because they spend most of their time during the school year…in the school building with other peers.”

The school chief said the division wanted to provide assurance through the program to “vet out any true bullying behaviors that may be occurring in our schools.”

In an e-mail to The Herald, Allen detailed that all primary school teachers have been trained in what bullying is, the four school-wide rules, how to conduct class meetings, and the consequences of bullying. “We are teaching the students about the role of the bystander, and how important it is to tell an adult at home or at school,” she said.

Allen noted that the school’s assistant principal, Jessica Fortner, is the OBPP coordinator of both the primary and elementary schools. She says Fortner has created “a plan for addressing bullying issues head-on to ensure that children feel safe, and to empower them with lifelong communication skills.”

As part of the new program, students at the primary school developed anti-bullying posters to hang outside of their classrooms, while elementary students scribed essays about the affects of bullying.

According to first grade teacher Amy Pennick, each classroom will have several weekly meetings on the program and its implementation.

According to Angela Patterson-Jones, the assistant principal at the middle school, implementation of the program there began last fall, and a kickoff assembly is planned for mid-April.