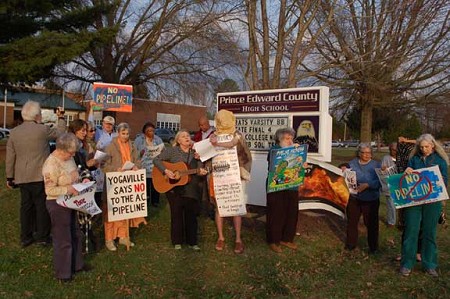 FARMVILLE — Forty-eight people, ranging from farmers to County supervisors, and from former state lawmakers to spiritual leaders and ministers, spoke Tuesday night in Farmville during one of many scoping meetings being held by the Federal Energy Regulatory Commission (FERC), regarding the proposed 550-mile Atlantic Coast Pipeline.

Five of the speakers, who were limited to three minutes in their comments to FERC representatives in the Prince Edward County High School auditorium, favored to the project. The remaining 43 expressed opposition and concern to the proposed 42” natural gas pipeline, which Dominion and three other partners want to see approved and buried across Buckingham, Cumberland, and Prince Edward counties.

Concerns of those opposed to the project focused on environmental issues, such as water and noise pollution, along with property rights issues, devaluation of land, potential hazards of a compressor station, the potential alternate route closer to the Yogaville community, quality of life, and lack of information.

Those who spoke in favor of the project cited that pipelines were safe and environmentally friendly, and stressed the economic benefit to the area, and future energy needs of the nation.

A majority of the speakers were Buckingham County residents, while others from Prince Edward, Cumberland, Amelia, and Appomattox also spoke.

Prior to the meeting, members of the Yogaville community, members of Friends of Buckingham (FOB), and members of the Union Hill Community—near where Dominion is seeking to locate a compressor station—picketed, sang their anti-pipeline version of This Land Is Your Land, and chanted “no compressor” along Zion Hill Road outside of the school.

“Some people also refer to [these] as public comment meetings,” Kevin Bowman, a FERC Environmental Scientist, who presided over the meeting, told The Herald as the auditorium filled before 7 p.m. “…What we’re trying to do is…get information from landowners [and] stakeholders on their concerns or comments about the project. And, what we’re really looking for, today, is environmental comments…Those comments to understand what we need to study about the area.”

On February 27, FERC announced its intention to prepare an environmental impact statement (EIS) that will discuss the environmental impacts of the proposed project. The announcement included notice of the opening of the scoping process that FERC uses to gather input from the public and interested agencies on the project. The input helps the Commission staff determine what issues they need to evaluate in the EIS, noted a FERC document.

Before Amelia County Administrator Taylor Harvie and Prince Edward County Supervisor C.R. “Bob” Timmons Jr. expressed their respective counties support for the project, Appomattox resident Steve Conner told the 70-plus members of the audience that he supported the project. The real estate broker and developer said he has properties “up and down current natural gas pipelines…I grew up within 300 feet of a compressor station, and know that natural gas is a safe, clean energy that will keep our electric bills and our energy bills reduced.”

He said he currently owns a farm that has a gas line running through it, and owns a home that has three natural gas pipelines and one 42-inch line in service in the yard. “This is one of the best ways and safest forms of energy that we have and most environmentally-friendly…I strongly encourage you to support this line.”

He said that the economic impact would be in the billions of dollars for this area.

Later in the evening, Amelia resident the Reverend Paul M. Wilson, pastor of two Buckingham churches, located in the vicinity of the proposed compressor station, cited property devaluation, issues with eminent domain, health hazards and risks, noise levels of the compressor station, lack of local employment, a negative impact on the local culture, and risks of destroying natural habitats, wetlands, communities, and families in his opposition to the project.

The Rev. Wilson, who noted that he was representing the United Baptist Association of Central Virginia and the Women’s Missionary Education Convention, based in Buckingham, said, “We see no immediate benefit to our area. Dominion is simply asking us to sell our heritage and renounce our birthrights…”

He said the pipeline was being built for financial gain for others, “and brings no more than destruction and ruin to our community and way of life.”

Following the three-hour-long meeting, Dominion spokesman Frank Mack noted, “We look at this [as] just another step in the process with the FERC…Part of the process is people being able to provide input…We have numerous counties that have done resolutions in favor of the project…I think it’s important, and FERC obviously thinks it’s important, to hear feedback from both sides…Our goal…is to build the best route with the least impact…”