Farmville Motorists Are State's Best In Clicking It 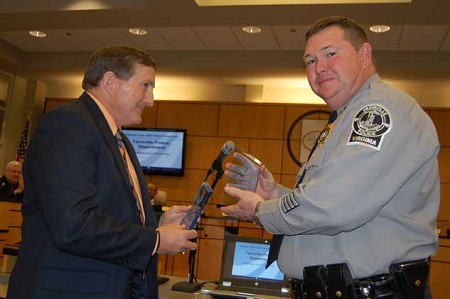 FARMVILLE — Residents of the Town of Farmville licked everyone in the state in clicking it.

When it comes to seatbelts, local motorists wear everybody else out.

The local seatbelt use rate of 99 percent takes a backseat to nobody, according to Michael Nash, with the Virginia Highway Safety Office of DMV.

“Out of all the awards I have given, this is the only one that’s been 99 percent. So, great job,” he said.

Nash presented Acting Chief of Police, Andy Ellington, with not one but two awards during town council’s February meeting: most improved and, secondly, highest usage rate.

The awards are presented to Virginia law enforcement agencies that are grouped competitively based on the number of sworn officers they have.

Not that Lynchburg would have a chance.

“This area had the most improved rate and won an award for that,” Nash said during the ceremony. “And it also received an award for the highest usage rate for safety belts.”

The pre-campaign percentage was 93 percent, which, Nash said, “is extremely high for the state. The average is much lower than that. So that is a significant demonstration by your citizens because they’re voluntarily complying with wearing their seatbelts, based on that rate.”

And the 99 percent usage rate following the campaign?

“You’re not getting much better than that. And that’s thankful to the citizens, again, complying and the enforcement efforts of the Farmville police department. So we at the Highway Safety Office applaud your citizens and your law enforcement agency for doing a great job.”

The six percentage-point increase won Farmville the most improved trophy and the 99 percent easily buckled up the highest usage award as well.