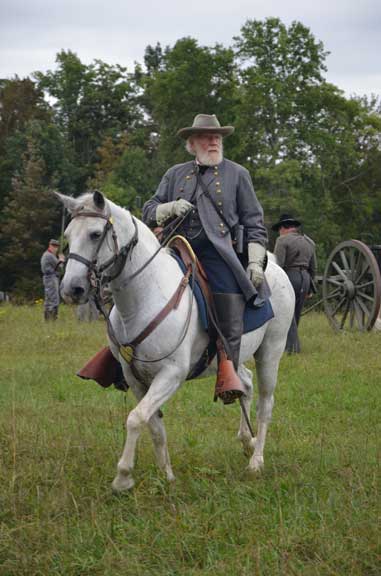 FARMVILLE — Anybody can pretend to be Robert E. Lee.

Nobody knows that better than David Palmer.

Memorize the relevant historical facts, dress for the part and grow a white beard.

Palmer, who has portrayed the Confederate general for more than 16 years, doesn’t make-do with the standard two or even three-dimensional approach, however. Oh, sure, he’s got the white beard and all the replica fixin’s.

But Palmer puts on more than a uniform.

He tries to slip inside General Lee’s skin.

Not settling for simply physical verisimilitude, Palmer reaches for the metaphysical, as well.

Palmer, who will portray Lee in Farmville on March 28-29 during The Last Stand re-enactment of the final days of the Civil War, said that he strives “to peel the onion and look down and find the soul” of Lee.

“Even if I’m addressing the troops for a battle, I put my best Lee on,” Palmer said during a Tuesday afternoon meeting of the local committee organizing next month’s Civil War sesquicentennial event. “In this fight, in my heart, in my mind, what would Lee say to those troops that are about to put themselves in harm’s way at his behest.”

Anybody can stand up and talk about Lee’s uniform, where he was born, where he went to school, when he died and what the commander of the Army of Northern Virginia did during his post-military career.

“Well, that’s not living your character,” the Roanoke resident said, flanked by his wife, Patricia, and Sandy Lucas, who will portray General William N. Pendleton next month. “Living your character is putting on their skin, as best you can. For the public, your purpose is to bring that person to life for them.”

And that goes beyond the image of Lee.

“Your persona also has to embrace it,” said Palmer, who was in town, with Lucas, to be shown various Farmville historical sites relative to next month’s re-enactment.That means if you slam your thumb while driving a tent stake into the ground with a hammer during a re-enactment the words leaving your mouth must be ones that Lee would have uttered.

Not the profanity you might have shouted in the backyard.

“You can’t do that if you’re Lee,” said Palmer, who undertook four years of research before his first public portrayal. “You can’t…You’re that person now. When you take on a persona that’s truly what you’re trying to do. I try to bring his character and his nature to life.”

Total commitment was required once Palmer decided more than 20 years ago to embrace the suggestion by the late Charles Hillsman that he do so. Hillsman was Palmer’s farrier and a man he describes as “the quintessential re-enactor and southern gentleman.”

Responding to Hillsman’s urging, Palmer recalls replying, ‘this is not an obscure colonel of infantry, this is a national icon here.’

“And Chuck said, ‘Dave, if people think you’re Lee and you do the research, you can do it.’”

After 48 months of research, Palmer had his first chance and the rest, he said Tuesday, “is history.”

But the research, he emphasized, never stops. Not ever.

“I still learn. The research goes beyond reading books. The research includes going to places where Lee was and preferably at a time when there’s not a lot of people around,” Palmer said, “so that you have the opportunity to sit and reflect and in your mind know what he knew so that you can formulate a perspective on what his emotions and thoughts might have been in that time-frame.”

Even after four years of research and though he is now in his 17th year of bringing Lee to life, Palmer said he still keeps his “mind open to learning new things about your character. You never close your mind to anything, even to the myths that exist about your character. You need to know and understand them and even perhaps how they became myths.”

Palmer describes certain moments as “these little side journeys” that can open up an insight that breathes nuanced life into his personification of Lee.

“You’re also looking for the emotion, because when you bring a character to life for the public you’re trying to present that character as a person, not just knowledge of facts, for example,” he said. “I told a lot of people I’ve met over the years when they’re doing research…research isn’t always just what you read, or what was said or what was done, but it’s also in what wasn’t done or wasn’t said.”

Lucas, a neighbor of Palmer’s, notes his friend’s expertise. “I’ve always been impressed by Dave and his ability to do first-person,” said Lucas, who is in the early stages of his Pendleton portrayal.

There is a physicality to properly doing Lee, or anyone, in the best possible first-person and the uniform details help, too.

‘When you’re doing your research and developing your character,” Palmer said, “the more accurate, for example, your uniform is, insignia, the boots, the spurs, the saddle, the tack, the weapons, the more accurate it is the more comfortable you feel in the skin (of that character). But that also comes from your research.”

When Palmer’s wife is asked if her husband’s in-depth, all-in submersion into Lee has changed his personality, he physically ducks, not knowing what to expect of a question he said has never been asked before.

No worries about the answer that is, nevertheless, revealing.

“He’s a genuine fellow and he’s kind and he’s good and he’s talented and he’s well-liked where ever he goes,” Patricia replies, adding that if her husband is going to do something “it’s going to be 110 percent or not at all.

“I don’t think it changed him much,” she continues. “I think it just brought out the characteristics that were already there.”

Palmer is visibly taken with that response.

Or was it Lee answering?

(The Last Stand re-enactment activities in Farmville on March 28-29 are a collaboration of the Heart Of Your Adventure tourism group that finds the Farmville Area Chamber of Commerce, the Farmville Downtown Partnership, the Town of Farmville and Prince Edward County partnering together)