Ready To Fly The Co-op Building: Apartments To Take-Off After Southern States' Relocation 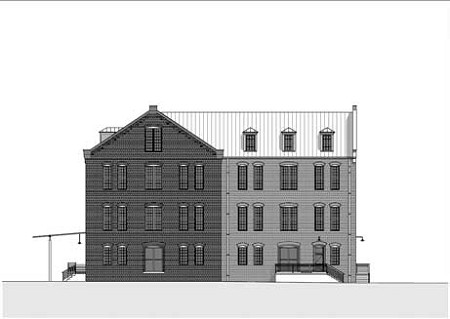 And the answer is August.

The eighth month of the year will see the co-op open its new Farmville location and work begin to transform the 30,000-square foot building it has called home for 65 years into 36 apartments aimed mostly at professionals rather than students.

And that will also be a win-win situation.

“It’s going to be good for both of us,” Prince Edward County farmer and co-op board member Bobby Jones said during an interview that included King and co-op manager Alfie Parker.

The co-op will be moving into a building that offers far more retail space—12,000-square feet rather than the current 1,200—while not requiring employees to haul heavy merchandise up and down several flights of steps, and plenty of room to park.

The new Southern States location will be “right next to our fertilizer plant, behind STEPS,” Jones said.

For King, when the deal to purchase the property closes in August an eight-year dream will come true. Discussions first began between Walk2Campus and the co-op in 2007 but the time and the timing weren’t right. With eight years additional experience in working with older and sometimes historical properties, King believes true justice can be done to the building that was once one of the town’s original tobacco prizeries.

“They’ve been really good stewards of the building. It’s in great shape,” King enthused. “And that’s kind of the way we look at it. We’re excited about the opportunity but also, as much as it’s an opportunity it’s a responsibility because this building is, sure, we’ll own it, but it’s a community asset.”

The project will see apartments on the top three floors, mostly one-bedroom and loft apartments that take full advantage of the building’s 14-foot ceilings.

“It lends itself to what you think of when you think of a loft apartment,” King said. “And I think the spaces, in terms of living spaces that will be created out of the building, are going to be very cool.”

The ground floor will house Walk2Campus’s property management office and amenity space for tenants, such as a workout room, business center and a larger gathering area.
For Walk2Campus, the project marks something of a departure from the student-centric approach which launched it 11 years ago in Farmville and now sees it located in seven university towns.

“I think it’s a different type of project for us. Traditionally, we get a lot of undergrads. I think we’ll get some undergrads here,” King observed, “but I also think we’ll get faculty, staff, professionals, folks affiliated with the hospital, anybody who wants to live and work in Farmville and live downtown and live in a place they can walk to all the local merchants, the restaurants, coffee shops, everything else that’s downtown.”

Great attention will be paid to the history of the building and its original look.

“We found some pictures of the building; the building was built in 1902. It was one of the original tobacco prizeries here in Farmville. It’s pretty cool,” King said. “They did full turnkey tobacco prizery operations, so they made the hogshead barrels here, they hung up the tobacco and they dried it, that’s my understanding, and prized it into the barrels, and the river’s right there so they just took it right down to the river and it went on to Petersburg.”

King said the project does not have a name yet but when it does that moniker will “tie into the history of the building.”

And the building is going to look virtually identical to its 1902 appearance. The non-original co-op structures won’t remain, such as the cinderblock warehouse on the back side of the building.

“What you would expect to see when we’re done is what the prizery looked like in 1902. It won’t be perfect that way,” King explained, “but that’s the intent, so anything that is quote unquote non-historic…probably won’t be here.”

King is so keen for the historical integrity of the building to be respected that historical consultants have been hired and discussions have been held with the state’s Department of Historical Resources.

The architects, Keith Scott and Julie Dixon, with Rosney Co. Architects, also have expertise and “know older buildings inside out,” King said.

Just as Southern States knows farmers cooperatives inside out.

One of the sticking points that prevented sale of the property to Walk2Campus from proceeding eight years ago was its mill grinding operation, the production of custom feeds for customers.

“We hated to give up that option,” Jones explained.

They don’t want to give it up now but between the decline in that part of the business and OSHA requirements for a new milling operation that part of the co-op’s history will become a memory when the new location opens on August 15.

Jones and Parker believe the co-op’s home of seven decades will be in good hands.

“Definitely,” said Jones, who’s also a member of the Prince Edward County Board of Supervisors.

“The time came together where it was a good opportunity for both of us,” he said of the co-op board’s decision to sell. “We’re looking forward to having a new home. It will be worker-friendly, warehouse-friendly, compared to this…”

“Our co-op is strong,” Jones said. “We’ve squeezed pennies pretty tight and this building was one means of doing it but it’s time we move up a little bit. I’m looking forward to the new facility. It will be nice to work with.”

The new location will unite all aspects of the Southern States Farmers Cooperative Farmville operation into one location at a site whose 12-plus acres offer plenty of room for any needed future expansion.

“We’re kind of split anyway. We had the feed and retail here and fertilizer plant there and at least we’re all together now,” Parker said, philosophically. “There’ll be some changes, but changes for the good.”

Asked about the challenges with a project that involves an old, historical building not constructed for residential use, King said, “You just have to be thoughtful about it on the front end. The great thing about the way this worked out is it’s given us more than a year to plan it and to get the right folks involved. So, yes, structurally there needs to be some reinforcement—the brick is old, the brick needs a lot of work. (So it’s) working within the structure in a way that protects it and showcases its historic use. It takes some thought.”

Expanding its investment in Farmville, however, was not something King and his Walk2Campus associates had to ponder.

The three men have been talking to The Herald in the co-op’s employee break-room, a small space that nevertheless is stuffed with shelves stacked with agricultural products.

Jones reflects on Farmville’s prime pieces of historical property and says, “I guess this is the last one.”