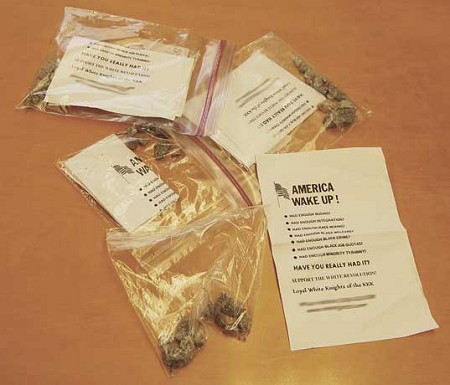 FARMVILLE — Under cover of darkness they cast their stones into the frozen depths of the night, hoping the ripples wash new recruits upon their white-only shores.

Farmville residents in The Avenues, along with several neighborhoods in Prince Edward County, woke up Thursday morning to find sandwich bags containing gravel and a flier promoting the Loyal White Knights of the KKK and its white supremacist agenda on their front steps, sidewalk or front yard.

“America Wake Up!” the flier declared, and “Support The White Revolution.”

The flier also contained a phone number with a North Carolina area code and a website address for the organization.

Similar bags containing the same basic message have been scattered across the nation since last fall and Virginia has been no exception in recent years.

“They just ride by and sling ‘em,” Acting Police Chief Andy Q. Ellington told The Herald on Thursday morning regarding the way fliers are distributed. “That way the rocks will weight it down in the yard.”

Police Lieutenant Bill Hogan concurred, saying, “the gravel is to hold the bag in place so it doesn’t blow away and so that people will find the propaganda.”

Local law enforcement officers do not believe last week’s distribution was carried out by local residents.

“No, not that we are aware of,” Acting Chief Ellington said, when asked if there was any local connection to the fliers.

Farmville town manager Gerald Spates told The Herald, “that’s not what Farmville’s about. It’s just not the way people think. People don’t think like that around here.”

“It’s really hard to say. My personal feeling about it, I don’t think it’s local,” the sheriff said during a Friday morning interview. “That’s just my personal feeling, but you know that doesn’t mean a whole lot because you’d be surprised what people do.”

As for the targeted areas in Prince Edward, Sheriff Reed said, “We’ve gotten quite a few (calls) from the Redd Shop area, the Hampden-Sydney area. As a matter of fact I got a couple of calls this morning,” Sheriff Reed said. “Last year we had the problem, too, but it didn’t start until February then. This time it’s starting up a little earlier.”

The KKK sect’s website contains a map citing locations in all 50 states. Richmond is identified as the Virginia base, with Raleigh in North Carolina.

Ellington said that he had spoken with a Longwood police officer “who said he just recently saw this on CNN that the KKK is under a big recruitment right now.”

But Wednesday night’s distribution appears to have singled out Farmville and Prince Edward County, alone, in the state.

The sheriff’s departments in Buckingham and Cumberland say there were no reports of fliers in those localities and State Police spokesperson, Corinne Geller, replied in a Thursday email to The Herald that the “VSP has not received any additional reports of white supremacist activity last night in the Commonwealth.”

Geller also said that unless the content of a flier contains “a direct threat against a person, entity, ethnic group, religious group, etc…they are protected under the First Amendment as freedom of speech.”

CNN reported in September that similar fliers had been turning up in dozens of US cities over the previous six months and quoted Robert Jones, the ‘Imperial Klaliff’ (Vice-President) of the Loyal White Knights of the KKK, as telling one of CNN’s affiliates, WHNS, that the sandwich bag flier distribution was part of the Klan’s “national night ride,” a recruitment effort that occurs several times a year.

Yes, Ellington said, “apparently…it’s a recruitment attempt to try to get people to call them and then recruit more members into it.”

Last year, fliers were distributed in Farmville on Longwood Avenue, according to Ellington.

“We’ve seen the same thing a year ago,” he said. “And the State Police…they’re aware of it too. They’ve seen them across the state.”

Lt. Hogan said the department doesn’t have a firm count on how many residents found the fliers in their yard last week “because a lot of people just pick them up and throw them in the trash. They don’t call us. But apparently they were scattered throughout The Avenues.”

Farmville police reported the incident to the State Police, as they did last year.

“Yes, every time something like this happens we let the Fusion center know, that’s their intelligence center,” Acting Chief Ellington said, adding that “we are aware of it and we monitor it and stay in contact with the State Police with this type of stuff.”

The Fusion centers were created after the 9/11 attacks, the state police website explains, “as a way to mitigate intelligence gaps and readily share intelligence across all levels of local, state and federal partners” and “to better identify, detect, prevent, and respond to terrorist and criminal activity using an all crimes/all hazards approach.”

Farmville police are asking anyone who might have seen any suspicious vehicles Wednesday night to please contact the department with any description or license plate information (434) 392-9259 or (434) 392-3332.

Sheriff Reed and his department are also keen to make an arrest.

“The guys, they’ve been patrolling and we’re trying to see if we can do some surveillance work to find out who’s dropping this stuff so we can make some charges,” Prince Edward County’s sheriff said.

“Sooner or later, somebody’s going to see somebody dropping them and get us a (license) tag number,” Sheriff Reed said, “and we’re going to charge some people with littering, if nothing else.”