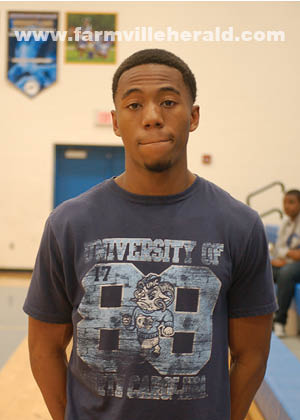 LAWRENCEVILLE — The Cumberland High School varsity boys basketball team visited Lawrenceville over the weekend and competed in the Brunswick High School Holiday Basketball Classic. While there, the Dukes finished in third place (out of eight teams) and Deitrich Brown was selected for the 2014 All-Tournament team.

The Dukes began the tournament on Friday, December 26, when they took a 51-49 win over Sussex Central High School. Brown finished with 2 points, two steals, and three assists during the game against Sussex. They advanced to the next round of the tournament, which was held on Saturday, December 27. However, they fell 59-43 to Brunswick High School that night. Brown contributed with nine points, two steals, and an assist that game.

The Dukes went on to play Nottoway High School on Monday, December 29 in the final round of the tournament. CHS sped past the Cougars, defeating NHS 45-39. With the win, the Dukes finished 2-1 in the tournament and claimed the third place prize. Brown finished the final game with 18 points, four assists, and two steals.