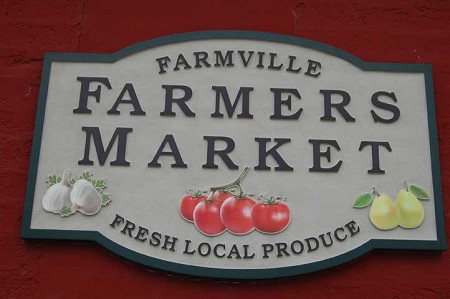 FARMVILLE — A community that markets together marches together toward a better harvest for all.

So believes the Town of Farmville, which is inviting the association of local producers who once operated the farmers market to return to the North Street facility.

The Town took over operating the farmers market this year, with hopes of expanding its use.

Those dreams, however, have wilted like un-watered lettuce in dry summer heat.

“I’d like council to offer the farmers market group that’s out there at STEPS, ask them to come back,” town manager Gerald Spates told town council during last week’s August work session. “We’d like them to participate in this market. There’s no reason for them not to be part of the farmers market.”

Town council agreed quicker than a hummingbird sips and flits.

Even though the signs still simply call it a farmers market.

Council member Pam Butler suggested a compromise plan that could suit those who want a pure farmers market and others who want a variety of things for sale.

A farmers market in the morning on Saturdays and other items offered for sale in the afternoon.

“Perhaps a possible suggestion would be it’s a farmers market until noon…Possibly, at least two Saturdays a month maybe have lunch—because the farmers are going to leave—have lunch and then, if you wanted to, turn it into a more of diverse market where people are selling things they’ve made, or that sort of thing, in the afternoon,” Butler said during last week’s discussion. “But in the morning it would be a farmers market, with produce and that sort of thing.”

Butler, a Main Street merchant, is no stranger to the farmers market and the association that once operated it.

Appointed last month to serve until next week’s special At-Large election, Butler said she was “happy to be part of the conversation because I certainly have been a supporter for the last 15 years. They were instrumental, actually, in me opening up Mainly Clay—because of their encouragement. I’d go hang out at the market and…they were cheering me on. So I feel connected and it’s also painful for me not having them over there.”

Spates had raised the farmers market issue during his monthly work session report to council.

The town manager noted the market is open to anybody, including local businesses, wanting to sell produce. Spates said he believes the Town’s policy of allowing businesses to sell at the market may have contributed to the decision by some producers to leave and sell their produce elsewhere.

“I think a couple of the rough spots (in the relationship) came up when we allowed businesses that raise (produce)—like B & M Greenhouse, for example. They’re a business,” he said, “but they raise their own stuff and they should be able to sell it.”

Town residents and businesses paid for the farmers market facility, he pointed out.

“If you think about it,” he said, “their business license and their taxes, they paid for that farmers market. We did get some money from the Tobacco Commission—I think it was a little over a hundred thousand dollars. We (the Town’s taxpayers) put $700,000 in that project. So, you take a look at the Tobacco Commission’s money, it’s not that much.

Spates said the Town is not trying to make money off the farmers market. “All we’re trying to do is control it and provide something for downtown,” he said.

Town council is eager to see that service strengthen through a united farmers market effort with all local producers selling their produce at one place.

Farmville Mayor David E. Whitus asked Spates, “Do you have a specific way of extending that invitation or olive branch?”

“You’re going to do that in person?” Whitus confirmed.

“We want them to be part of it,” Spates reiterated.

“I would just think, too, that in the process, as we knew from the beginning, sometimes you kind of end up wiping the slate clean to restructure. And I think this has kind of hit it where we supposed on the committee that it would, sooner or later, and (we) realize it’s just going to take cooperation on both parts, both parts being willing to bend a little,” Davis said, expressing his belief that the goal can be achieved if the Town and the market’s former producers find middle ground, common ground in which to plant seeds of cooperation and from which the harvest can be shared.

“I think we can make it work out and I think it would be in the best interest of the community, itself,” he concluded. “But I think it’s going to take some bending on both sides to make it happen.”