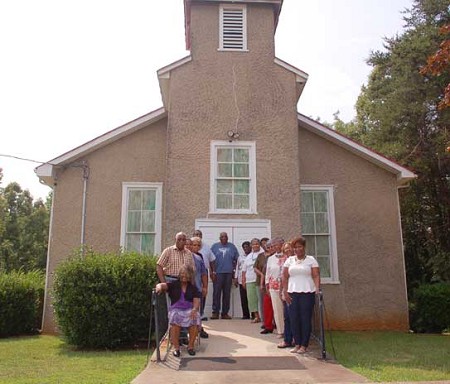 TUGGLE — They have come together for combined Christmas programs, enjoyed annual cookouts and worshiped together.

On Sunday, the courtship will officially end. Mt. Moriah Baptist Church and the Upper Room Outreach Ministries will make it permanent.

The two shall become one.

Mt. Moriah has the longer of the histories. Born out of downtown Farmville’s packed First Baptist Church in 1875, they first began meeting in the Tuggle area as a “brush arbor” church near the intersection of the Tuggle Road and the old Route 460 before building a permanent structure.

The Upper Room Outreach Ministries, started and still pastored by the Rev. Stanley Wesley, began in 2002, meeting in a building on East Third Street in Farmville. They moved to the former SCOPE building on Griffin Boulevard for a time and, more recently, rented a building off of U.S. Route 15 North near the Sheppards area of Buckingham.

It has been a church without a permanent home.

Mt. Moriah Deacon Cornell Walker noted that the idea of the two churches coming together probably began last year. He and Rev. Wesley had had some conversations; this year, both church congregations met several times and decided it was something they wanted to do.

Mt. Moriah had been searching for a pastor and had several speakers come in. As for Rev. Wesley, who will pastor the church, Walker noted that he’s a “friend to Mt. Moriah, he has preached here at Mt. Moriah. We’ve heard him preach at Upper Room. He is a man of God who is spirit-filled and we think can do a good job at leading both of us combined.”

There is shared warmth between members of the two congregations. Members of both gathered earlier this week for a photo as an enquiring reporter’s question prompted one of the congregants to offer a “we love each other.”

Ah, the ingredient that makes for the best of marriages.

“…We’re looking forward to this merging, and the coming together with Mt. Moriah,” Rev. Wesley said. “They have been a church that we have worked closely with throughout those years…since we started and everything. I just feel that the Lord is leading in this direction and that He’s going to bless this combination coming together that we might be able to do greater things for Him because there is strength in numbers.”

The union will be off relatively small congregations. Mt. Moriah has 37 on roll and the Upper Room has about 15.

There had already been some crossover as congregants have shared in ministry and attended one another’s services.

“…Some people, you know, when they go to a different house or a different setting…they don’t feel at home,” Deacon Wilbert Saunders, of Upper Room said. “But I have always felt at home when I came here.”

The two congregations have met several times in the past few months and took a look before they leaped. They shared the same vision and found the merger was something both churches wanted to do.

They will, of course, gather in Mt. Moriah’s church facilities on Tuggle Road, a stucco building beaming with history and care.

It’s not unusual that churches split, but it is rare when they merge.

“…I believe that when we are on the mission for the Lord and if we are sincere about it that there should be a time when we can come together if we’re letting God do the leading and we are following Him. Because He’s not for division, He’s for unity and this is what it’s gonna take, just people coming together and respecting one…another and knowing that it’s not about us, it’s about the work of the Lord,” said the Rev. Wesley, who is excited about the unity and the two coming together.

He also noted, “…We know we’re coming from two different…backgrounds and everything, but there is still one common denominator. He’s the center point so when we draw to him, then things should come in line.”

Traditionally, this is the annual homecoming service for Mt. Moriah and it will be so again this year. The regular service will start at 11 a.m. and, at 3 p.m., there will be a unity and installation service where the two churches will come together and Rev. Wesley will be installed as pastor.

The remainder of the week will feature revival services; prayer and praise will begin at 7:30 with regular services at 8 p.m. led by the Rev. Wyatt Vaughan.

FARMVILLE — My vision for the Town of Farmville is to promote the orderly growth of commercial and residential areas,... read more