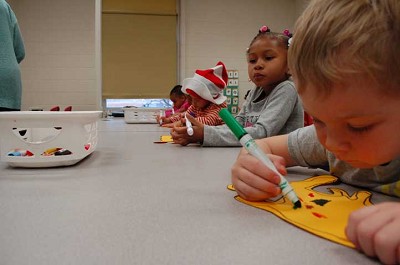 Partnership Is A Work Of Art

BUCKINGHAM — It’s a partnership that’s only about a year old, but its impact will last many years throughout the lives of students.

The Buckingham County Preschool has entered into an agreement with the Longwood Center for the Visual Arts (LCVA), establishing an interdisciplinary art program for students, using the instruction from an LCVA employee.

“Oh, they love her. They love her,” the preschool’s lead teacher Vickie Craft emphatically said recently regarding the children’s affection for Amanda Haymans, the LCVA’s school programs educator, who teaches classes at the school. “(The students) love it when she comes. She reads a book, she always does some literature with them, and then she bounces off from that (with art).”

Haymans, who’s known at the preschool as Miss Amanda, is a 2012 graduate of Longwood University. She comes twice a month to the school and works with all nine classes, teaching the students literacy and other subjects through art.

“For the most part, we work with all Buckingham County Schools in general, including them in all of our educational programs, pre-K through 12th grade. The specific program with the preschool started over the summer,” Haymans explained during an interview with The Herald. “Craft contacted the LCVA and said ‘This is my problem. We need art. We don’t have anything.’ And, at the same time, I realized that she didn’t have PE or music or anything…” Haymans added.

She says that the idea of the partnership piggybacked off a reading program the LCVA had conducted in the summer.

“It’s all interdisciplinary with English and other subjects that we’re talking about. In October, we talked about Dia De Los Muertos…I told them about the Mexican culture’s holiday, so they learned a little bit about another country. We looked at maps, so they saw a little bit of geography…That’s kind of how I do all of the projects,” she cited.

Haymans says the need of the preschool and the offerings of the LCVA is what really brought the partnership to fruition. “We want to help anyone who needs us, and they needed us,” she added.

Haymans teaches the classes of 18 three and four-year old students in the school’s computer lab during scheduled times.

“I explain to them what we’re doing and how to do it…They really listen and they love it. And they want to do art,” she commented.

The LCVA provides all of the classes’ supplies, as well, according to Emily Grabiec, the LCVA’s interim director.

“We are able to do that free of charge for the school…through a grant fund through the Jesse Ball DuPont Fund,” she added.

Haymans says that during her classes, either the teacher or a paraprofessional is present in the room, helping to guide the students during instruction. “They’ve been really receptive…They’re a joy to work with,” Haymans remarked regarding the preschool teachers and administration.

During a classroom visit to the preschool, The Herald observed Haymans providing an atmosphere of learning through art.

“They’re learning rhyming words,” she told the paper shortly after helping a student with a marker. “A lot of them have been practicing recognizing letters and numbers. They have a letter of the week, so sometimes I’ll try and talk about the letter of the week.”

On the flat, small tables in the lab, colors of the rainbow raced across the children’s paper as they used markers and crayons to decorate orange fish, which had already been cut out for them.

“You can put an eye on it, and a mouth on it,” one of the teachers commented as the student peered at Haymans.

She says that markers, crayons, and paint are the student’s primary tools in the class.

“I try to do that,” Haymans said of connecting the artwork to the reading lesson the students receive prior to drawing and painting.

During the class, the students diligently worked on a fish project that Haymans assigned. Her plans are to take all of the paper cutouts and make a large flip-style book, which will be featured in the LCVA’s youth art exhibit.

“This will be the first year they’ve been in it…” Haymans said of the venture.

“Look at mine!” one of the children called out to Haymans. “Good job,” she responded, smiling at the student.

While walking through the hallway of the preschool, Craft explained that all she had to do was call the LCVA to get the program going. “I just called Longwood (University) saying ‘…We don’t have any resources, we didn’t have any art.’ So I got her.”

“They love her,” yelled a teacher walking down the hallway. “She’s right on their level.”

Haymans says that she has seen the children grow in her short time at the preschool. Art helps the children with their fine motor skills, she details, along with general directions, and sticking to a topic, and learning by doing.

“It helps solidify what they’re doing at the time,” Haymans added.

“You can explore other topics too…Through art, you’re able to cover so many other disciplines,” Grabiec interjected.

When asked if she would continue the partnership into next year, Haymans responded that she would love to. “If they wanted us to come back, that would be awesome. And we’d totally do it.”

“It’s the best part of my day when I go out there. I really look forward to it,” the recent college gradate said.

“I’ve seen them grow, too. I almost no longer have to ask them to put caps on markers and stuff. They’ve already gotten into the habit of doing art-related things, so they now know they can put whatever they want to on the paper…We have an overall theme and guidelines, like today we worked on fish. It was to decorate their fish, and they can do it however they’d like.”

The LCVA’s annual area youth art exhibition, “Start with Art, Learn for Life,” is currently on display in the lower level and Main Street Window Gallery in Farmville. The exhibition, where the preschool’s art is displayed, will be on display until April 28.

HAMPDEN-SYDNEY — Hampden-Sydney College announced Tuesday morning, April 1, that the board of trustees has approved a one-year contract extension... read more