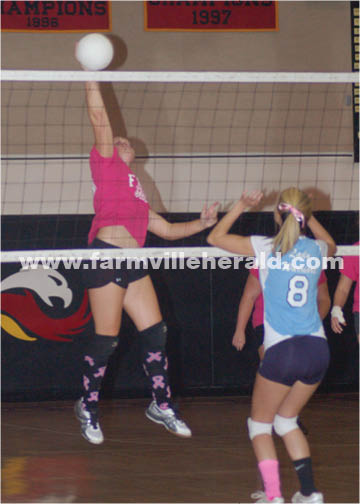 FARMVILLE – It hasn't been the season that the Fuqua School volleyball team would've wanted coming into the season, but the Falcons took a big step toward a desirable finish to what to this point has been a tough season with a 3-1 (25-20, 10-25, 25-22, 25-22) victory over previously unbeaten Tidewater Academy on Tuesday night at Gilmer Gymnasium. It was a big step in the right direction for a team that had only three victories to that point.”We played with more confidence than I have seen all year,” said Fuqua head coach Lora Smith. “Players that needed to step up and take leadership roles on the floor did so, and when they did, the others followed. We communicated better than we have, and it certainly paid off. This is about a 180 from the game we played against Richmond Christian last week.

“The Falcons held a slim lead for much of the first set, and though Tidewater managed to hold close, and tied the score at 18-18, Fuqua never let the Warriors get a lead. An ace by Chasidy Bragg and a kill by Caroline Wiles was part of a 4-0 run that put the Falcons up 22-18. A Macie Ware dive and dig back over the net landed between two TA players, and she finished the set with a kill to give the Falcons the early lead. The score was tied at 7-7 in the second set when Tidewater's Samantha Dunn rotated into the server's position. She rolled off 14 consecutive points, and by the time the Falcons regained the serve, it was for all intents and purposes over.” That was much like what Heather [Hicks] did in the second set of our game with Richmond Christian last week. [Dunn] got hot, and by the time we were able to break her, we weren't gong to match it.” The Falcons weren't shaken for long. FS jumped out to a 6-1 lead in the third set, and much like the first, was able to stay a step ahead of the Warriors. TA took its first lead at 14-13, but a kill by Hicks and two straight kills by Wiles pushed FS back into the lead. Dunn rotated back into serve for the Warriors. Though her run wasn't as big as in the second set, she did help string together a 5-0 run to put her team back up 20-19. Fuqua responded with a 3-0 run of its own. Taylor Schmidt had two kills down the stretch to help FS to the three point victory.

The Falcons moved out to a comfortable lead in the fourth set. Caroline Bryant gained the serve on a kill and registered two aces to give FS a 15-10 lead. A string of service errors moved her back to the front, where she got a member's bounce of sorts when her return hit the net, spun up and over, and landed safely on the other side to give Fuqua a 19-14 advantage. Tidewater rallied, however, and took a 22-20 lead.

Fuqua broke the Warriors' serve, which sent Bryant back into the serve.

The Falcons wouldn't give TA another opportunity. Fuqua rattled off the final five points, the last coming on an ace by Bryant that sent the warriors to their first defeat.

“During a time out, I asked them if they worked this hard and played this well to stop now. Tidewater made that run, and if they had won that game, I don't know if we could've come back in the fifth set. But the girls didn't give up, and they finished strong. I was glad to see their hard work pay off tonight. Teams like Tidewater usually find a way to win games like that, and we were able to keep that from happening.”

Bryant finished the match with 17 points and five kills. Wiles had 12 points and seven kills, while Hicks had 15 points and eight kills.

“I'm proud of what the girls were able to do tonight, and I hope we can look back on this game and say this is where we were finally able to put it together.”

FARMVILLE – With their playoff lives hanging in the balance, for the most part, the Prince Edward County High School... read more