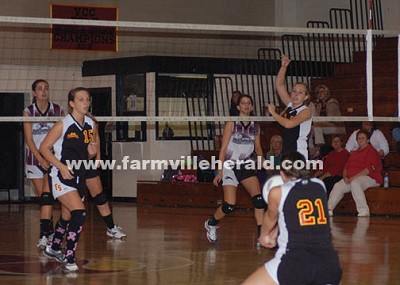 FARMVILLE – A hot serving streak by Fuqua School senior outside hitter Heather Hicks wasn't enough to overcome a rough night on the court in a 3-1 loss to Richmond Christian.

“We played very poorly,” said FS head coach Lora Smith. “Richmond Christian played well, but we didn't play to what we're capable of playing, or what we have done recently. We're still struggling with our passing, but that comes from a lack of communication.

“It all starts and ends with communication.”

Two aces by senior Chasidy Bragg gave the Falcons a 9-8 lead early on in the first set, but Richmond Christian turned the tables from there. Up 15-13, RCS used an 8-0 run to take control of the set and go on to win by 12 points.

Fuqua came out hot in the second set and quickly built a 10-4 lead when Hicks took the serve. By the time she handed it back to RCS, the Falcons had the game well in-hand with a 23-5 lead. Hicks was credited with six aces in the 13-0 run by the Falcons that ended with a 25-7 victory.

“There are times when you get a server that has a hot streak like that, and you could take the other five players off the court and she'd still win the point,” said Smith. “It doesn't happen often, but Heather was in the zone there. Unfortunately for us, we couldn't build onto that momentum.”

The two teams played pretty close in the third set, but Hicks couldn't regain the momentum she had in the previous set. A 5-0 run, mainly on RCS errors, gave the Falcons a 15-14 lead, but the Warriors took the lead for good at 17-16, and went on to claim the third set 25-17.

Fuqua trailed for much of the fourth set. An ace by Taylor Schmidt put FS up 11-10, but Richmond Christian responded with another large run to take an 18-11 lead. A kill by Macie Ware pulled Fuqua to within five points at 18-13, but RCS quickly pulled back out to an eight point lead at 22-15.

Hicks was part of a 3-0 mini run, to pull FS back to within five points at 22-17, and with no margin for error, the Falcons rattled off five straight points to pull back to within one at 23-22.

A long potential set-tying rally was killed in the Fuqua court when two FS players ran into one-another, and RCS quickly slammed the door on the potential come-from-behind bid by Fuqua to win 25-23.

“That [collision] was a little snapshot of what we did, or didn't do, rather, all night,” said Smith. “We didn't communicate well at all. I think it comes from ebbs and flows of the game. Teams can get really pumped up, and then get down just as quickly. When that happens, some teams have the tendency to get quiet, and I think we did that tonight. We quit talking, and when we did, Richmond Christian was able to make its run.”

Fuqua, which had won two games in a row, prior to Tuesday night's contest, will host Tidewater Academy on Tuesday, before traveling to Amelia Academy for its final road match of the season next Thursday. The Falcons will play the final three games of the regular-season at home.