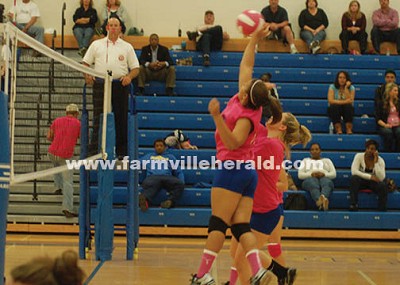 CHS Rallies To Force Tiebreaker In Loss To Bluestone

The first set aside, neither team was able to gain what could be considered a large lead all night, as Cumberland rallied from down two sets to force the fifth game tiebreaker.

“I take full ownership of that first set,” said CHS head coach Heather Sutton, whose team was wearing pink uniforms in observence of Breast Cancer Awareness Night. “These uniforms were ordered with the numbers they had earlier in the season, and I put them in the wrong rotation.

“After that, they settled down and played some really good volleyball. They played like they wanted it. They were hungry and after losing the second set, they didn't go away.”

Cumberland, which led for much of the second set held a 23-22 lead following a Mckenzie Parker kill, but a service error gave the Barons the ball as senior standout Carmen Studifen, a tall player with a high jump and a powerful spike that can take over a match, took the serve. The Dukes managed to contain her powerful serve, but a bad set gave BHS a free ball, which the Barons wound up turning into a point. Studifen finished the second set off with an ace.

“Service errors are still getting us,” said Sutton. “But those become easier to correct when we play like we did tonight. The passion and desire was definitely there.”

It showed. Cumberland jumped out to a 6-3 lead in the third set and held a 17-13 lead after a powerful kill by Ivy Arbaugh. A tip by Norma Duncan helped Cumberland maintain a three-point advantage at 20-17.

With the match seemingly in hand at 23-19, Cumberland appeared to force match point on a powerful spike by Parker, but it was ruled that she was in the net, which gave the point to Bluestone instead.

The Barons rallied to take a 24-23 lead, but Cumberland forced a tie and won the set on what could also be seen as a questionable call at the net.

The Dukes jumped out to a 6-1 lead in the fourth set, but fell behind at 10-9. The two teams traded the lead back and forth during the middle part of the set, before Cumberland scored four straight to take a 19-16 lead on a kill by Cassie Martin.

Bluestone closed to one point at 20-19, but a spike by Arbaugh gave the Dukes the possession and a two point lead. Bluestone again closed to within a point at 22-21, but a kill by Martin gave CHS possession, and the Dukes tied the match with a 3-0 run.

Martin aced to start the fifth set, but it was mostly all Bluestone the rest of the way, as the Barons jumped out to an 8-2 lead in the short set. Cumberland clawed back to within three points at 9-6 on an ace by Duncan, but Bluestone pushed the lead back to five points at 11-6.

The Barons took a 14-8 lead, before a kill by Arbaugh extended the game. With no room for error, Parker delivered three consecutive aces to close to within two points at 14-12, but her fourth serve, which was delivered to an open area of the court, was about a foot long, giving the Barons the victory.

“This loss stung harder than the others have, because they put more into this game than they have all year,” said Storrie. “Everyone on the team fulfilled their role tonight, and played to their potential. That effort is good enough to win most nights.”

Cumberland has four games remaining in the regular-season. The Dukes travel to Goochland on Monday, and will host Buckingham on Wednesday night, before wrapping up the season with road matches at Amelia and Nottoway.

“We have an opportunity to end the season very strong and go into the tournament with a lot of confidence.”