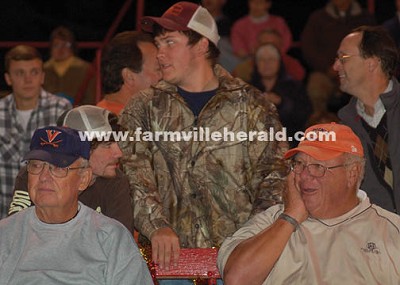 FARMVILLE – It was a bittersweet night for the Fuqua School football program last Friday at Gilmer Field. First, the bitter part. The Falcons dropped a 35-0 loss to Division IV power Blessed Sacrament-Huguenot. The Knights led 35-0 at the half, and proved to be gracious guests after an emotional halftime that concluded with a tribute to longtime coaches Lewis “Skeeter” Fore and Walter “Bozo” Addleman. Around 70 former football players from the 47 years Fore coached at the school made their way onto the field to shake the hands of the two legendary coaches while cheerleaders paid tribute in cheerleader fashion. The moment wasn't lost on either coach, who had announced in September that this would be their final season as football coaches.

“I was kind of hoping to get through the game and slip away,” said Fore, a humble man, who will end his long career as the winningest independent school coach in the state at the end of the season. “A lot of people came, and many of them came a long way just to be there. I kind of knew that something was going on, but it was…very nice. Great to see so many old faces. That meant a lot. It really did.”

Knowing it would have to play a perfect game in order to have a chance, the Falcons were reminded early-on that BS-Huguenot is a team that can make its opponent pay twice for every one mistake made. After a three-and-out to start the game, a high snap on the punt led to a block that gave the Knights their first possession inside the Fuqua 20 yard line. Three plays later, BS-H was ahead 7-0.

Fuqua's second drive stalled again, and three plays later, BS-H was again in the end zone to take a 14-0 lead a little over midway through the first quarter.

That's how Fuqua's night went. Even with the opportunity to make a stop on a long fourth down play in the second quarter and perhaps push the game a little deeper into the night, BS-Huguenot landed the knockout punch with 4:24 left in the half to take a 28-0 lead. The Knights have been just that good over the last eight years, and a thorn in the Falcons' side all through that stretch. Even this year, against a tougher than normal schedule for a Division IV team that could land BS-H out of the four team playoffs, the Knights have proven to be as tough as they always have against Division IV competition.

“When we played Isle of Wight pretty tough down there, but we really didn't make many mistakes at all,” said Fore. “We made them go 80-85 yards to score, and didn't really give them a short field. Against them, it was 14-0 at the half. Friday, it was 14-0 before we knew it. A couple of turnovers at the worst time against a team that knows its back is against the wall gave them all the incentive they needed.

“Coach [Mike] Henderson is gone, but their new staff has managed to keep that tough mentality his teams have had for so long. I don't care what seed they have when the playoffs start, I wouldn't bet against them.”

Fuqua has three games remaining on the season – all on the road. This Friday the Falcons will travel to Roanoke Catholic for a 7 p.m. game, before heading to Chintoteague High School and then Hampton Christian. Fuqua can be competitive in all three games, provided injuries remain at a minimum.

The Buckingham County High School football team got a taste of its own medicine last Friday night in its game... read more