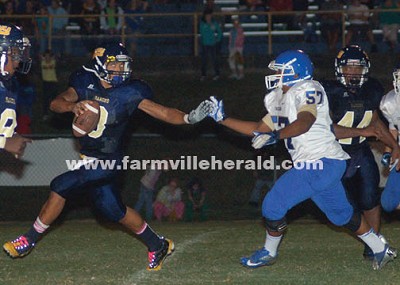 SKIPWITH – The Bluestone High School football team had been knocking on the door for a while, and it was only a matter of time before the Barons broke through for its first James River District victory.

The Cumberland High School football team just happened to be the ones on the schedule when it happened, as the Dukes suffered a 35-24 loss to the Barons, who celebrated homecoming a come-from-behind victory.

Turnovers in the red zone, a total of four of them, kept the Dukes, who otherwise didn't play badly, from getting their second win of the season.

“It's most frustrating,” said CHS head coach David Sullivan. “The turnovers, and that we had the ball for almost the entire third quarter and came away with nothing…it's something that can eat at you.

“As frustrating as it was, and we can look at a play here or there that could've reversed the outcome, I don't want to take anything away from Bluestone. That is a totally different program than a year ago. I'm glad for them, but I definitely didn't want to see it come against us.”

Cumberland fell behind 21-6 in the first half, but started to regain its composure and crawled back into the game by halftime.

Quarterback EJ Rose, who was receiving his first varsity start, found Davonn Taylor in the end zone for a 28-yard touchdown.

A minute before the half, Rose scored on a one-foot dive to pull the Dukes to within three points at 21-18.

The Dukes held the football for most of the third quarter, and stalled in the red zone twice before finally breaking through to take the lead at 24-21 on a 38-yard touchdown by Bo Winbush.

The Barons scored a little over a minute into the fourth quarter to take a 28-24 lead, and both teams traded turnovers for much of the fourth.

It appeared that Cumberland was going to retake the lead after putting together a late drive. The Dukes drove inside the Bluestone 10, but was turned away on downs. DeAundre Brooks' catch on fourth and goal was about a foot out of the back of the end zone. Bluestone took possession deep in its territory with 2:52 left, and used two big runs to eventually score and seal the victory.

Cumberland had trouble with Bluestone's rushing attack. Several would-be tackles for loss were shed off for big gains.

“There was one play where their running back dragged nine people down the field. That's inexcusable.”

The Dukes will host Goochland on Friday night at 7 p.m.

No Respite For Eagles In Southside Opener

The tough non-district portion of the Prince Edward County High School's football team may have been over, but last Friday,... read more