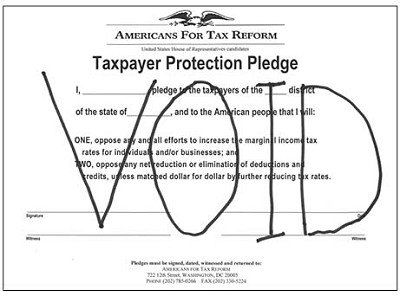 Pledge Allegiance To An Open Mind In The US Congress

Two hundred and thirty-six Republican members of the House of Representatives-including our own Fifth District Congressman Robert Hurt-have signed an oath, pledging themselves to oppose any tax increase, along with two Democrats; 40 Republican Senators, too, and one Democrat.

Reelect them? Or, in the case of George Allen, who has signed the Pledge as a candidate against Tim Kaine for the US Senate, elect them? For a six-year term?

They are lucky we don't institute impeachment or recall proceedings against them unless they renounce and erase their names from the Americans For Tax Reform's Taxpayer Protection Pledge.

I believe signing and blindly adhering to the anti-tax pledge conflicts with the congressional oath of office, sworn on a Bible, which concludes with the words “I will well and faithfully discharge the duties of the office on which I am about to enter.”

Everyone who signed the anti-tax pledge has sworn themselves to oppose supporting any use of a tool which, through our nation's history, has proved periodically necessary. Sometimes a town council, a board of supervisors, a General Assembly or the Congress of the United States of America must raise taxes to meet a clear and present need. Raising tax revenue can be necessary for the good of the country and a duty of the office of congress.

President Ronald Reagan-the Republican hero of so many conservatives and Republicans, and admired by many others-raised taxes 11 times as President, doing so in seven of the eight years he was in office. Why? Because he believed doing so was crucial for the good of the country.

Raising taxes should not be anyone's goal but as a necessary tool it must be on everyone's shelf if needed. Just as tax cuts should be on the shelf. Imagine Democrats signing an oath to oppose any legislation that did not contain a tax increase. The GOP would go ballistic.

Lobbyist and conservative activist Grover Norquist is the man behind the anti-tax pledge and it's as if those who signed have pledged allegiance to Grover Norquist and to the republic for which he stands.

I believe no member of Congress should bind themselves to any pledge that would, as I believe this one surely does, affect them faithfully discharging the duties of their office, or even simply thinking with an open mind.

The Americans For Tax Reform, over which Norquist presides, states on its own website that by signing the pledge “candidates and incumbents solemnly bind themselves to oppose any and all tax increases.”

How does solemnly binding yourself to oppose use of one of the chief instruments of government keep the faithful pledge members of Congress make when they take the oath of office?

The ATR claims it has the role of promoting and “monitoring the Pledge” but insists the pledge is made to a candidate's constituents. Which ones? Which constituents? Certainly not all of them or even barely more than half of the people who live in many congressional districts, including our own. I don't want Mr. Hurt or anyone else signing away consideration of raising taxes any more than I want, for the sake of illustrative argument, Democrats signing a pledge that will solemnly bind them to oppose any legislation which does not raise taxes. That would be just as wrongheaded.

Former Republican Senator, Alan Simpson, the co-chairman of the National Commission on Fiscal Responsibility and Reform, described the anti-tax pledge as “no taxes, under any situation, even if your country goes to hell.”

Or film the scene this way:

“Who cares about the iceberg,” declares the doomed ship's captain. “I have solemnly bound myself not to turn left (or right) to avoid it, even if it means sinking the ship, with every life lost.”

Politics is accurately known as “the art of compromise” and compromise is impossible if half of Congress, the majority in the House, in fact, has effectively pledged itself not to compromise.

Instead of art, Congress is filled with virulent, corroding, hateful graffiti that pollutes the landscape.

A spokesperson for Rep. Hurt said the congressman has “consistently supported policies that will keep taxes low, reduce uncertainty, and put us on the path to comprehensive tax reform…” But true tax reform and tax fairness cannot automatically block 50 percent of the potential solution, which may require middle class tax cuts and allowing the Bush tax cut for the top two percent of wealthiest Americans to expire. I also believe that supporting policies is one thing but signing away thoughtful consideration and decision-making to the Pledge is something else.

In his heart of hearts, Rep. Hurt must feel very much the same way. After all, as a member of the Virginia General Assembly he was one of the moderate Republicans who crucially worked with Democratic Governor Mark Warner in 2004 to reform the state's tax code-the policy he supported then was a combination of lowering some taxes and raising others. And for the good of the state, saving its AAA bond rating. It was a necessary tool.

In fact, Delegate Hurt voted in favor of a $1.4 billion tax hike that year believing it was necessary-and it was-to avoid a government shutdown in Virginia. The same situation exists in our nation today, but he has signed the Pledge against using the tool in Washington that was so vital to saving Virginia from catastrophe in 2004-a combination of targeted tax cuts and tax revenue increases.

The Republicans, Grover Norquist, and Americans For Tax Reform would howl their socks off if Democrats signed a pledge solemnly binding themselves to oppose any legislation that doesn't contain a tax increase. But they have no problem embracing an equal and opposite strategy for themselves. And they have created a dangerous mess.

President Obama hasn't signed any pledge against tax cuts or for tax increases. He wants middle class tax cuts and for the tax cut for the wealthiest two percent to expire. The president isn't the problem. The only oath he has taken is the oath of office.

I would ask members of Congress, and candidates like George Allen, to tear up their pledge into little tiny pieces but they cannot because they don't have them. The pledge must be signed, dated, witnessed and returned to Americans For Tax Reform.

So here's a solution. A copy of the pledge is to the right, in the space normally reserved for an editorial cartoon-somewhat fitting because the pledge is a joke, in its own way, though diabolical. Tear it up and mail it to: Americans For Tax Reform, 722 12th Street, Washington, DC 20005.

Editor, The Herald: I've been listening to the president talk proudly about how he saved the car industry jobs and... read more