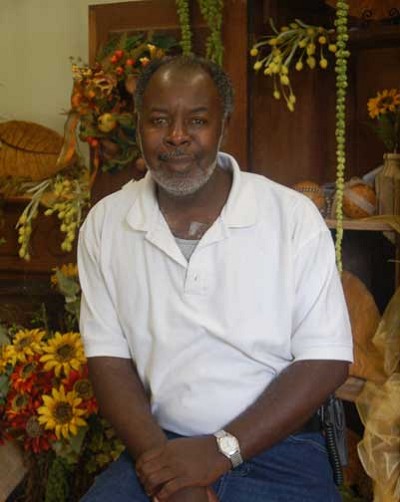 If you already receive the paper by mail, add an online subscription for only $5.00 for 1 year.

By subscribing, you will be able to view all the news and obits on our website.

This year Good Neighbor Day in Farmville lived up to its name. Donations collected at Farmville's participating florists, Carter's Flower Shop and Rochette's Florist, were presented recently to Ralph Crawley who is currently in need of a kidney transplant.

“I was really surprised,” Crawley stated. “I didn't expect it.”

Crawley, a longtime firefighter and EMT in the Farmville community, had both kidneys removed in July.

“I started in housekeeping at Hampden-Sydney,” Crawley related. “Then I went to preventive maintenance and now I'm with the Water/Sewer Department.”

Crawley has also served as president of the Prince Edward Firefighter/Rescue Association for the past six years. The Association, which includes the County's seven fire departments as well as the rescue squad, sponsored Good Neighbor Day this year.

“We try to keep all the fire departments up to standards,” Crawley said of his position with the Association.

Crawley currently serves as assistant chief for the Hampden-Sydney Volunteer Fire Department where he has been a member for 37 years.

“I've had kidney problems for the past ten years,” Crawley said. “I had enlarged kidneys – it's called polycystic kidney disease.”

Polycystic kidney disease is a kidney disorder passed down through families in which many cysts form in the kidneys, causing them to become enlarged. Surgery to remove one or both kidneys may be needed.

“My nephew had a transplant four years ago,” Crawley related.

Now Crawley is starting the process of finding a donor.

“It will be at least six months before they could do the surgery,” he stated. “They still need to find a donor.”

Presently, Crawley is recovering from the July surgery and just recently returned to work.

On Good Neighbor Day 2012, over 2,000 community “neighbors” visited Carter's and Rochette's where they received 15,000 free roses provided by 77 local sponsors. In the spirit of Good Neighbor Day, many who received those free roses placed donations in the fireman's boots manned by members of local fire departments and rescue squad at each florist. A total of $4,500 was collected that day, and a check for that amount was presented to “Our Good Neighbor, Ralph Crawley” – stated in the heading of a full-page advertisement in the Herald after the event.

“Ralph Crawley is a singularly giving man. He is a friend when we are in need,” Dr. Townsend stated in the Good Neighbor Day advertisement in the Herald. “As he recovers and resumes his busy life, he is now in need of our help.”

Providing help when help is needed is, after all, what good neighbors do.