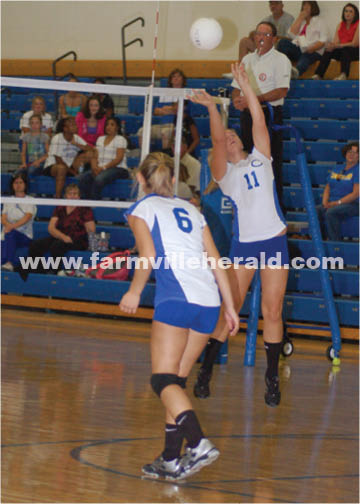 CUMBERLAND – The best term that may describe the Cumberland High School volleyball team this season is that the Dukes are consistently inconsistent.

“We can't be consistent,” said CHS head coach Heather Sutton. “We will have a high and follow it up with a low. They know they can do it.

“They're doing a lot of things correctly, but not enough of them consistent enough to win. Right now, I think that's what they need; the taste of victory.”

Cumberland trailed Lunenburg for most of the way in the first set, and put together a little rally to close to within two points, but they were unable to get over the hump. Lunenburg got off to a big lead in the second set. The Chargers led 20-11, before Cumberland rattled off five straight points, including an ace by sophomore Taylor Parker that closed the Dukes to within four points at 20-16, before Lunenburg won the next one and ended the set with five consecutive points.

The Dukes jumped out to a lead in the third set and went ahead 9-7 on an ace by libero Nicole Jefferson. Cumberland maintained a small lead. A block by Ivy Arbaugh put CHS ahead 20-15. The Dukes appeared to have the set in hand after an ace by Parker put them up 23-19, but the Chargers fought back with five straight points to take a 24-23 lead.

With no more room for error, Cumberland fought back and scored the final three points of the set. The winning point came on back-to-back blocks by senior captain Mackenzie Parker.

The Dukes were unable to carry that momentum over into the fourth set. Lunenburg jumped out to a 6-1 lead. Cumberland closed to within two points at 9-7 on a tip by Taylor Parker, but as it had done all night, Lunenburg was able to quickly steal away the momentum. The Chargers worked their way out to an 18-9 lead. Cumberland closed to within five at 21-17, and an ace by Jefferson pulled the Dukes to within three at 22-19, but Lunenburg was able to slam the door on any thoughts of a CHS comeback by scoring three of the final four points.

The Dukes were scheduled to host Prince Edward on Thursday night in a non-district match, before returning to JRD play on Monday at Bluestone and at home against Goochland next Wednesday.

“The key right now is to keep the girls positive. Their faces showed that they were hurt. Losing is supposed to hurt, and you don't want to get to a point where it no longer hurts, but it can't get to a point where you dwell on it. We need to make sure we put this one behind us as quickly as possible.”