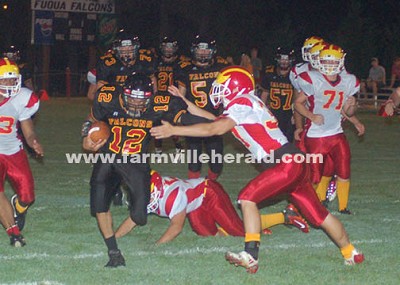 It may have come two weeks later than desired, but the Fuqua School football team got its delayed season off on the right foot with a 44-6 victory over Alliance Christian Academy.

As big as the game was, even bigger was the announcement that this would be head coach Lewis “Skeeter” Fore's final season as head coach.

“All things considering, it wasn't bad,” said Fore, who deflected the personal attention of the announcement to the performance of his team. “Considering that we didn't have our scrimmages and the two games to work on things, we did about as well as we could've hoped.”

Three minutes into the contest, Fuqua quarterback Antonio Gonzalez hit Josh Davis on a 30-yard swing pass to give FS an early lead. Gonzalez converted the two point attempt to put the Falcons ahead 8-0.

Gonzalez intercepted a pass in the end zone with 3:34 remaining in the first quarter to squelch a scoring drive by Alliance Christian.

Nine seconds into the second quarter, he scored on a 36-yard run and found North Angle in the end zone for the two point conversion to give FS a 16-0 lead.

Playing in only its first season as a varsity program, Alliance Christian (0-3) scored its first touchdown in the program's history when Chris Kaine picked up a fumble at midfield and returned it 55 yards to pull his team (also nicknamed the Falcons) to within 10 points at 16-6 after an unsuccessful two-point conversion.

Fuqua (1-0) began to pull away on the ensuing drive. Gonzalez capped a long drive with a 15-yard touchdown run up the middle to push Fuqua's lead to 22-6 with 4:29 remaining in the half. Then, Angle picked up an Alliance fumble in ACA territory, which was quickly cnvered by another Gonzalez run (a four-yard run) and two point conversion pass to Trent Jacobs. With 17.7 seconds left in the half, Tyler Frink put the game away with a 60-yard fumble return for a touchdown. Fuqua's extra point kick was blocked, but FS held a 36-6 lead at the break.

Frink recovered his second fumble of the night with 7:05 left in the third, and Fuqua scored its final touchdown of the night with 6:52 left to play on a 40-yard touchdown run by tailback Al Baker. Fullback Matthew McKay converted the two-point conversion. The score forced a running clock for the remainder of the game.

Baker ended Fuqua's night with an interception with 1:02 left to play in the contest.

Alliance Christian turned the ball over six times. Gonzalez's fumble was the only turnover committed by Fuqua.

“We minimized our mistakes, which was a big key for us going in,” said Fore. “We took advantage of their mistakes. I think those two fumble recoveries by Angle and then by Frink changed everything completely.

“We also were able to take advantage on some bad snaps. They may have recovered them, but the play would cost them ten or so yards. They're a very young team. Mostly freshmen and sophomores. They had two or three pretty good players, and all of them are underclassmen. If they can hold things together, they could be a strong program in a couple of seasons.”

“We have a lot of room for improvement, but for a lot of these kids, it was their first game. They're going to make first game mistakes. Now, we have two weeks to prepare for our next game. We have film to study. These kids will get to see themselves for the first time in game situations.”

Fuqua will not play at Broadwater Academy this weekend as originally scheduled, and will host Hampton Roads Academy on September 21.

One of the biggest strengths over the years for the Buckingham County High School football team has been its ability... read more