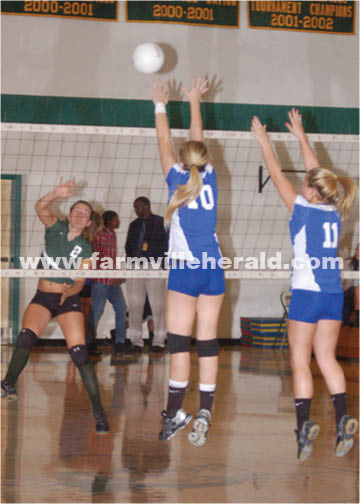 Dukes Win At Buckingham, Fall At Home To Amelia

If you already receive the paper by mail, add an online subscription for only $5.00 for 1 year.

By subscribing, you will be able to view all the news and obits on our website.

The Cumberland High School volleyball program split two games this week, winning 3-1 at Buckingham on Monday night, before dropping a 3-1 decision to Amelia at home on Wednesday night.

The Dukes have been unable to shake the pattern of inconsistency that has plagued them the entire season. Good sets are followed by bad, which was the case in both matches.

Against Buckingham, the Dukes jumped out to 25-15 victory, before the Knights came back in the second game to tie the match at one game apiece with a 25-19 victory.

The Knights, who were working through some discipline issues in the first set, played the Dukes tight in the final three.

“We relaxed again after the first set,” said CHS head coach Heather Sutton. “It was kind of like last week against Bluestone. Buckingham is scrappy, and played well after everyone evened up starter on starter. Still, we need to work on carrying momentum from one set to another.”

“We had a couple of girls that missed practice, and I will reward the ones that always show up with the start,” said BCHS head coach Ethan Abruzzo. “I think everyone understands that, and when we played our regular rotation, I saw a team that was hungry for a win. We fought well, we just had too many mental errors. Physical errors are going to happen. It's the mental ones that kill us.”

Buckingham built a comfortable lead in the second set and maintained it throughout. An ace by Samantha Baird put the Knights up 17-12. Cumberland battled back and pulled to within two at 17-15 on a kill by Taylor Parker, but gave the ball back over to the Knights on a service error (one of ten committed by the two teams in the second set alone). BCHS scored five in a row, including a pair of aces by Maggie Vaughan to take a 22-15 lead, and traded points from there to tie the match.

The two teams played tight in the third and fourth set. Cumberland trailed 14-12, but took the lead for good with a 5-0 run that included a pair of aces by Ivy Arbaugh.

The two teams traded the lead several times in the fourth set. Buckingham led 18-14 on a kill by Robyn Davis, but Cumberland went on an 8-0 run to take a 22-18 lead. The Knights pulled to within a point on an ace by Ashley Hellerstedt, and tied the set at 23 apiece when a Cumberland blocker ran into the net, but a kill by Gilliam gave the Dukes possession and CHS was able to close out the match on the next point.

“We had good stretches, only to follow them up with bad ones,” said Sutton. “But we toughed through it and hopefully we can build on this as we head into the rest of the season.”

“Robyn did everything she could possibly do tonight,”said Abruzzo. “We've played almost everybody on our schedule to four or five games, so you know what you're capable of when you do that repeatedly. It can get discouraging. The only thing that will really help us at this point is a win. That will give this team confidence going forward.”

Against Amelia, Cumberland fell behind 25-20 in the first set, and was trailing 23-17 in the second, before rallying with five straight points to close to within a point at 23-22. Amelia, however, won the next two to take what looked to be an insurmountable 2-0 lead.

Turns out it was, but Cumberland showed why several of its losses have been frustrating in the third and at the start of the fourth sets.

Down 9-6, Arbaugh rotated around to the front line and took over the match for a brief period. Arbaugh tallied two kills, a block and three hard spikes that weren't handled as the Dukes went from down three points to up 19-12 in a matter of minutes. Even balls she didn't get to, she altered as Amelia knocked three balls either wide or long in an attempt to avoid her blocks.

It appeared Cumberland had stolen the momentum. The Dukes closed out the third set 25-16 on an ace by senior captain Mackenzie Parker.

CHS ran out to a 10-4 lead in the fourth set on a kill by Cassie Martin, but Amelia rallied with a 9-0 run to take a 13-10 lead. Cumberland pulled back even at 16-16 on a kill by Arbaugh, but Amelia scored the next six points to take a commanding 22-16 lead that proved too great for the Dukes.

“Our best match to date was our scrimmage against William Campbell,” said Sutton. “We played well all night that match and we've had flashes all season, like in that third set, but we haven't been able to put together a complete match since.

“Still, you see what they can do, and they are so close. You know it's there. It's a matter of getting it out of them every time.”