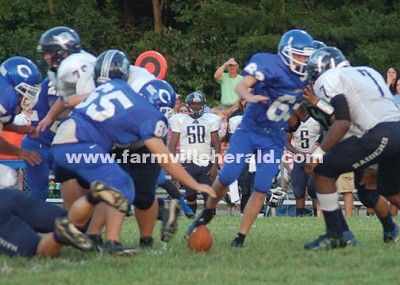 For the second straight week, the Cumberland High School football team is contemplating what may have been after allowing a close game against Appomattox in the Dukes' home-opener slip away in the fourth quarter in a 32-8 loss to the Raiders.

Two fumbles that led to scores deep in Cumberland's own territory turned what was a close game into a relatively comfortable final margin of victory for the visitors.

“I said before the year that I wanted to see improvement every week,” said Cumberland head coach David Sullivan. “It's hard to say that I saw that, given the final score, but I did see some things I liked. Offensively, we still have a lot of work to do.”

Cumberland (0-2) gained only 149 yards on the night. Quarterback Bo Winbush led the Dukes with 49 yards on eight carries, while tailback TJ Ford had 42 yards on seven carries.

Things didn't start well for the Dukes. Appomattox returned the opening kickoff 70 yards for a touchdown to take the lead just 15 seconds into the game.

The score remained 7-0 at halftime. Appomattox (1-2) went up 14-0 on a fourth-and-five play that went for a long touchdown over the middle.

“Our safety bit on the option play,” said Sullivan. “It was one of those plays that you set up all game and run it at the opportune time. It was a good call on their part.”

Cumberland cut its deficit to 14-8 later in the quarter. Cody White pounced on a fumble at midfield, and fullback Kevin Jones capped the drive on a seven-yard touchdown run.

Winbush's two-point conversion cut the Raiders' lead to six points, before things fell apart for the Dukes in the fourth.

“In some ways, it's easier to get blown out from the get go,” said Sullivan when asked whether a close loss is harder to swallow than a blowout loss. “In a blowout, you can quickly figure that the other team was just better. In the close ones, you keep going back to a play here or a play there. Those are the ones that really get to you.

“Right now, our playmakers are not making plays. All to often, we're giving up third-and-eight or third-and-nine. We have to stop those conversions.”

Cumberland will travel to Altavista on Friday night for a 7 p.m. non-district contest.

“It's not going to get any easier for us for a while,” said Sullivan. “We've got to keep at it and continue to get better.”

CUMBERLAND – When the Cumberland High School football team spills out onto the field for its home opener against Appomattox... read more