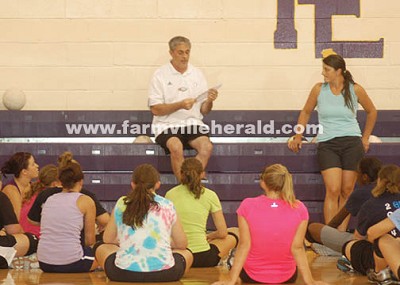 Teams Turn Up The Heat At Fall Practice

Pleasant weather, well, not oppressive weather, has greeted area prep players who are in their first week of fall practice. The Prince Edward County High School football program expects to have numbers in the lower to mid sixties combined for the varsity and junior varsity teams. There won't be many drastic changes for the Eagles under second year head coach James Ford.

“We're going to do pretty much the same things we started last year,” said Ford. “We're adding to it – a wrinkle here or there – but for the most part, we're focusing on doing what we've been doing, but doing it better.”

The Eagles will return a strong nucleus from the 2011 squad, but they must find a way to compensate for the loss of Ralick Lockett to graduation. He scored in every way imaginable for PE last year, and Ford feels that with him alone, they won't be replacing just one player, but four.

“He was our main threat on offense, defense, special teams – wherever we needed him. Now it's up to someone, or a couple of players, to step into those roles. It will be tough. I think we'll be improved, but the league was young last year, so I expect everyone has improved along with us.”

Football players weren't the only ones battling the heat this week. Buckingham's volleyball team was forced to move its practice from the BCHS Gymnasium to the gym at Buckingham County Middle School due to an uncharacteristically hot gym.

“It was oppressive in there on Monday,” said head coach Ethan Abruzzo about the conditions in the BCHS Gym. “It's usually rather chilly, but it was too much to bear, especially since we have this gym we can use.”

Around 40 girls are expected to try out for the varsity and junior varsity teams at BCHS. Needless to say, competition has been fierce.

“We lost seven off of last year's team to graduation, so we're going to be young in a district with more seasoned teams. But we have to continually work on improving as the season goes on.”

About 30 players are vying for spots on the two PECHS volleyball teams. The Eagles finished second in the Southside District to Southampton last season, but advanced to the Region I Tournament.

“We passed really well last year,” said PE head coach Bruce Bogese, “but we couldn't match up to the height advantage Southampton had. We've lost some key components from last year's team, but we're going to be taller. Hopefully, by the time we get to our district games, we'll have the consistency in our power game to go along with our height.”

Practice Is No Game

Allen Iverson was correct when he said that practice was no game. Area high school teams took the field for... read more