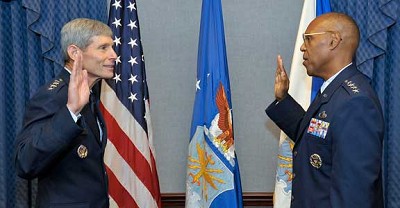 Lieutenant General Larry O. Spencer was awarded his fourth star, making him a full general, and promoted to Vice Chief of Staff of the United States Air Force on July 27.

In addition to his own specific duties, if the Chief of Staff of the Air Force is absent or unable to perform his responsibilities General Spencer will also fill that role, which includes advising the President of the United States, the Secretary of Defense, and the National Security Council, while serving on the joint chiefs of staff.

General Spencer's mother, Thelma Gaines Spencer, was born and raised in Prince Edward County. She currently resides in Maryland. His father, the late Alfonzo Spencer, an Army veteran, was born in Red House.

Gen. Spencer was given the oath of office by Air Force Chief of Staff Gen. Norton Schwartz and the Secretary of the Air Force, Michael Donley, officiated the Pentagon ceremony.

President Obama appointed Gen. Spencer, who had been assigned as the director of force structure, resources, and assessment with the Joint Staff in the Pentagon, which saw him develop capabilities and conduct studies, analysis and assessment for the chairman of the joint chiefs of staff, according to the Air Force's website.

The four-star general is 1979 graduate of Southern Illinois University and received a commission as a second lieutenant via an ROTC program a year later.

The general was also the first Air Force officer to serve as Assistant Chief of Staff in the White House Military Office, serving in that capacity from 1994 to 1996.

In addition to his uncle living in Prince Edward, Gen. Spencer also has an uncle and aunt living in Red House.