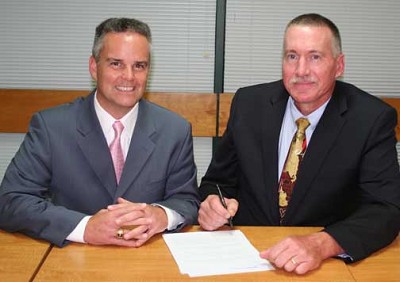 BUCKINGHAM – Following a closed session on Wednesday night, the Buckingham County School Board, in a unanimous vote, appointed Cecil Clark Snead, II as the new superintendent.

Stepping to the podium, Dr. Snead thanked everyone for the hospitality and kindness extended to him throughout the selection process.

“I am absolutely honored and I will work and put myself out there one hundred percent for the kids in this community-for pre-K through 12 and beyond,” he shared.

He offered, “I can promise you that I will always work from the standpoint of what is best for the children.”

Snead was born and raised in Bedford County. After graduating from Bedford's Liberty High School, he attended Virginia Tech where he majored in mathematics and earned his bachelor's degree.

In 1989, Snead began his career in education teaching math and computer science at Floyd County High School. From 1990 to 1996, he taught the same subjects at Auburn Middle School in Riner.

“My principal at that time suggested I get my administrative degree so I earned my master's in educational leadership at Radford University in 14 months,” shared Snead during an interview on Wednesday.

After receiving his master's, Snead accepted an appointment as math coordinator for Montgomery County Public Schools.

Since 1998, he has been employed by Roanoke County Public Schools, a system with over 14,000 students. He was first hired as an assistant principal at Cave Spring High School, working with instruction; and, then served as principal of Northside Middle School.

In 2005, Snead completed his doctorate in educational administration at Virginia Tech. Subsequently, in July of 2006, he was appointed director of instruction.

“Then, somewhere along the line because of being pressed to save money, when the director of CTE retired, I absorbed that and adult education in addition to instruction,” said Snead. “About a year later the director of technology retired and, yes, I got that, too.”

He offered, “So I was wearing a lot of hats. In retrospect it was a blessing because I was able to learn so much.”

Sharing that he truly believes God has a path for everybody, Snead said, “If we follow that path and don't try to mess with it too much, everything will work out just fine.” He added, “And that is how I am here.”

Snead explained that his mentor and former superintendent, Dr. Lorraine Lange believed he was ready for the next step and in late May gave him her blessing to apply for superintendent positions.

“The one I wanted was one that would remind me of my roots and where I am from, a place that I could feel good about,” he stated. “And, Buckingham County really did fit the bill.”

He shared that during the interview, the school board seemed “real and personable.” Snead added, “I thought that if the board is representative of the county, than certainly the citizens of the county must be warm and personable. And, I have found that to be true at every turn.”

Snead shared that he couldn't say enough about Joan Staton, interim superintendent. A lifelong resident of Buckingham, Staton, who has spent the last 33 years as a teacher and principal, has been touring the school facilities with Snead and introducing him to employees within the school system as well as county officials and members of the community.

“We haven't known each other that long but I know she is a giver and a supporter,” he shared.

During his comments on Wednesday night, Snead told Staton, “You have allowed me to confirm my beliefs in the board and the staff that I came to understand during this journey.”

Talking about his wife Sherrie, Snead stated, “I have the most truly adorable, supportive, loving wife that anybody could have.”

He shared that although it was his career that brought them to the area, Sherrie has already started teaching English to seventh graders in Cumberland County.

The oldest daughter, Skyler, is in Los Angeles where she is becoming an actor. “And, she is not just talking it, she really is doing it,” said Snead.

Macy, the 21 year-old, is a rising junior at Virginia Tech; Bailey, is a sophomore in high school; and, Savannah is a rising eighth grader.

“Obviously, we are very busy,” he offered. “And we love to spend as much time with our daughters as we can. I love the bond that we have.” He added, “I am blessed to have the wife and kids that I have.”

In his spare time, Snead enjoys hiking and biking with his wife. “And I love to run.” He added, “We love the outdoors. We stay outdoors.”

Continuing, Snead shared, “And, we love history. We love to tour everything historical.”

Talking about his Bedford roots, Snead shared that he grew up helping his grandfather with his 400-acre farm. “So I've mowed many a field.” Noting that they had about 100 head of beef cattle, Snead said he would come home from school and help feed them. He added that his father was a dairy farmer until he decided to go to work with Piedmont Label.

Reminiscing about growing up in rural Bedford, Snead shared, “Being here is kind of like being home.”

Talking about the importance of a positive attitude, Snead is a believer that holding on to one's faith is a precursor to happiness and being able to work through life's challenges.

Revisiting his earlier thoughts on God's plan, he reiterated, “I know beyond a shadow of a doubt that is why I am here. I really do.”

He shared that he was sitting on a rooftop at Pacific Beach, in California, talking with his wife and stepdaughter about what the future could hold for all of them when a number that he did not recognize came up on his phone.

The caller was Charlotte Patterson extending the board's interview proposal. “I interviewed the next week and the rest is history,” stated Snead.

Snead continued, “Our job affects kids. Every thought and every decision that is made should be about how it is going to benefit our children.”

He added, “If it weren't for every one of these preschoolers through seniors coming here, we wouldn't have a purpose.”

According to Snead, the first mission for everyone on the school division's payroll is how their service can affect a child's life positively. “That is how we have got to move forward. That is who we are,” he stated. “And, I have found through my interactions with people here that is how they think.”

Offering his impressions of Buckingham County Public Schools thus far, Snead stated, “I see sincere enthusiasm and excitement that I can only attribute to their love for kids. Everyone seems to be poised and ready for students to come back into our system. And, that is a wonderful thing to see.”

He stated, “I've been very impressed with the level of professionalism in all the schools that I've visited.” Noting that he has talked with all the principals, Snead said, “There is so much pride exuded by all of them. It gives me a great level of comfort.” He added, “And the same is here at the central office.”

Snead shared that he is really looking forward to meeting all of the teachers, all of the educators, all of the support staff. “So I can be of servitude to them,” he stated. “That is another way I look at this job, it is one of service. Basically it is me trying to figure out how I can help make everyone successful at what they do so they can serve their students so the students can go out into the world and be successful.”

When asked what he would like to bring to the division, Snead stated, “I want to be able to provide our students with 21st century learning opportunities that will equip them to be successful upon their graduation from Buckingham County High School.”

He offered, “I am currently assessing and understanding where we are with 21st century learning. And, I think I do have experience from working on some past initiatives that will enable me to work with staff here and bring some of those ideas to light.”

“My favorite part of that is the critical thinking piece. Teaching our students how to think critically is paramount to their success,” he stated.

Noting that there will be jobs out there in three or four years that we don't even know about today, Snead shared, “We don't even understand or can prepare our kids directly for the jobs that are going to be available tomorrow so we have to give them the ability to think and problem solve.”

Expressing his gratitude for the opportunity to serve as superintendent to the children and families of Buckingham County Public Schools, Snead concluded, “I will do my best to continue the wonderful things that make Buckingham unique and prosperous while embracing new possibilities that can take us to even greater heights.”