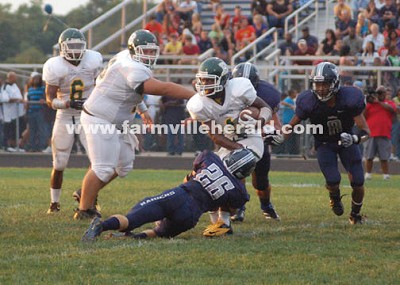 Knights Cruise To Win Over Appomattox

APPOMATTOX – The questions about how the Buckingham County High School football team would fare after the graduation of veteran quarterback Tarian Ayers were answered in the Knights' season-opener at Appomattox on Friday night.

The response, seemingly was “without a hitch”, as they dominated on both sides of the ball in a 34-7 victory over their traditional season-opening rivals.

Buckingham attempted only three passes on the night. Senior quarterback Camre Johnson, who moved into the position from his more familiar receiver spot, turned in a solid performance on both sides of the ball.

“I really can't put it into words right now,” said Johnson following a solid performance at quarterback and as a safety on the defensive side of the ball that included five tackles, a forced fumble, a recovered fumble and a game changing interception at the end of the second quarter that gave the Knights the momentum for the rest of the game. “We've been working all summer to get to this game. It's such a big game so early in the season, and we see it as a momentum that will hopefully help us reach our goals.”

“We beat a good team tonight,” said BCHS head coach Craig Gill. “Any time you can come to Appomattox and get a win, it's big. This sets the tone for the season. Appomattox lost a lot from last year, but you can tell by looking at them that those guys are football players. They're built like football players.”

Buckingham tailback Kyree Koonce opened the scoring midway through the first quarter. He found a small hole in the defense and sprinted down the middle of the field for a 46-yard touchdown. Kenneth Johnson added a two-point conversion on a fake PAT attempt.

The two teams traded turnovers for the remainder of the first quarter, and much of the second, until things opened up for Buckingham toward the end of the first half.

The Knights were able to sustain a long drive that ended in points. The drive was capped by a Kenneth Johnson five-yard touchdown run with 46 seconds remaining in the second quarter. The extra point kick sailed wide, but the score appeared to give Buckingham the momentum going into the break.

In the span of about 10 seconds, Appomattox came close to ripping that momentum back, if not for a touchdown saving tackle by BCHS kicker John Saxon at the BCHS 30 yard line. Cam Johnson's interception two plays later, set the tone for the second half.

“It's easy to forget how close this game was for a half,” said Gill. “Both teams had some turnovers in bad spots, but neither of us were able to take advantage of them. Before Cam's interception, they were in good position to score, and since they got the second half kickoff, it easily could've been a tie game before we got the ball again.”

Appomattox tailback Kendall Blankenship found a hole in what was a stifling Buckingham defense with 1:53 remaining in the third to score on a 50-yard touchdown run, but Buckingham quickly recovered and put the game away on a one-yard touchdown by Kenneth Johnson with 6:52 left to play.

Cam Johnson was 3-3 passing for 25 yards. Justin Ayers had two catches for 23 yards and Koonce had the other for a two-yard gain.

Kenneth Johnson led the Knights on the ground with 159 yards and three touchdowns on 24 carries. None of his rushes resulted in negative yardage. Koonce had 95 yards and a pair of touchdowns on 12 touches. Cam Johnson rushed 15 times for 66 yards.

Defensively, Tariq Bartee led the Knights with 11.5 tackles and a half sack. Wade Lee had six tackles, and Kenneth Johnson had 4.5 tackles, one tackle for a loss, two sacks, two forced fumbles and a fumble recovery. Devin Smith had 3.5 tackles, two tackles for loss and a forced fumble.

“I can see where we're starting to gel on our offensive line, and I can't say enough about our defense,” said Gill. “Coach [Seth] Wilkerson did a good job of getting the young men ready to play their split-back veer, and adjusting in the game. Appomattox came out in a package we hadn't seen them run in their scrimmages, and we held them to seven points.”

Buckingham will receive a bye this week, and will return to the field on September 7 at Prince Edward.

If the Prince Edward County High School football team didn't have enough to worry about in its season-opener, the Eagles... read more