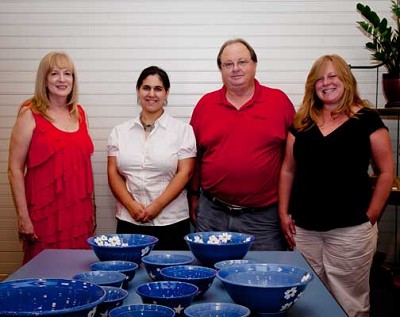 In May of this year, Governor Bob McDonnell kicked off the first annual Governor's Bowl food drive to help keep Virginia's food banks stocked during the summer months. Organized regionally in conjunction with the Virginia Chamber of Commerce, this competition will award the state agency or Chamber that brings in the most pounds of food for its local food bank from Memorial Day to Independence Day with a “Governor's Bowl.” Rick Erickson and Kendra Spicer, a team of potters from the Farmville area, created the handcrafted ceramic bowls for this year's event.

Leslie Van Horn, executive director of the Federation of Virginia Food Banks, was in Farmville last week to pick up the bowls.

“Rick Erickson and Kendra Spicer have been so generous with their time and design work in creating these bowls,” Van Horn noted.

The Governor's Bowl, Van Horn explained, is modeled after the Legal Food Frenzy spearheaded by then Attorney-General McDonnell in 2007. This competition among the Virginia legal community also benefited food banks across the state.

“It made perfect sense for the governor to continue this program,” she added.

The winners of this year's Governor's Bowl will be announced at the governor's office on Aug. 6.

“Having these special bowls created just for this event has created even more excitement among the Chambers in the state,” Van Horn said. “The bowls Rick Erickson and Kendra Spicer designed really are beautiful!”

Erickson originally built a state-of-the-art ceramic studio for his wife in the basement of his home in Green Bay and held classes there before taking the position with Mainly Clay.

“I've been working with pottery for eight or nine years,” he related.

Kendra Spicer, of Farmville who also worked on the Governor's Bowl project, started working with pottery as a second career. She is also an accomplished concert cellist, illustrator, and art student.

“Kendra was one of my students,” Erickson noted.

Erickson made and glazed the bowls, and Spicer did the intricate flower carvings.

“When the Virginia Food Bank was soliciting artists for ideas for the Governor's Bowl we made a bowl and then met with them,” Erickson related.

Once the Farmville potters were selected for the project they went to work, making four large bowls and 20 smaller bowls for the Governor's Bowl presentations. Three Chamber offices and one state government office will receive a Governor's Bowl based on the total number of pounds of food donated. Chamber offices in the state completed with other like-size offices in categories small, medium and large as determined by the Virginia Chamber of Commerce.

The presentations will be made in early August. The smaller bowls will be given to thank other groups that assisted with the governor's food drive.

In designing their bowl, the potters at first considered the proposed guideline of using a patriotic theme.

“I thought to myself – this is not really a national food drive, it's about the state of Virginia,” Erickson said. “So we decided to go with a state-oriented theme using blue for the state flag and decorating the bowl with dogwood blossoms, the state's flower.”

The smaller bowls are blue with white stars.

There's little doubt that Virginia's “food insecure,” now numbering over one million, would consider all who participated in the Governor's Bowl to be stars.

According to a Virginia Food Banks press release, a large number of these individuals are children, senior citizens, disabled adults, and the new face of hunger – individuals who have lost their jobs and are having problems making ends meet.

“Summertime is one of the most challenging times to keep our distribution centers filled with food,” Van Horn concluded. “This statewide effort will make a huge difference to over one million Virginians in need of emergency food assistance.”

CUMBERLAND – During a joint meeting between the Cumberland Board of Supervisors and School Board on July 26 a public... read more