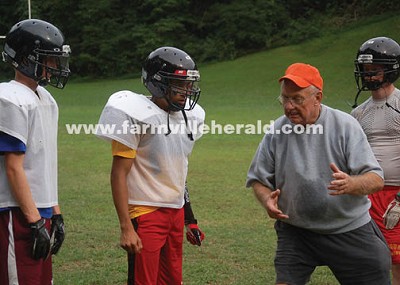 After nearly two weeks of debate, Fuqua School announced on Monday that it will field a varsity football team for the 2012 season. The Falcons will begin its season on September 7 at home against Alliance Christian at 7 p.m.

“We got a good enough response for us to put a team together,” said Fuqua head coach Lewis “Skeeter” Fore at the team's second, first practice on Monday afternoon. “It's close, numbers-wise, but we have 15, maybe 16, and hopefully we can bring up three or four from the JV.”

The decision on whether or not Fuqua was going to field a varsity team for the 2012 season wasn't made until Friday.

Fall practice was suspended at the beginning of August due to low turnout. Recruiting efforts made by the school leading up to, and upon the opening of school, resulted in enough varsity eligible students. Some have little or no previous football experience.

“We're going to have to cram as much in as we can,” said Fore, “but at the same time, not get ahead of ourselves. We don't have much margin for error or injury.”

The delayed start to practice has caused the traditional season-opening games against Brunswick Academy (August 24) and Kenston Forest (August 30) to be cancelled.

Alliance Christian, a first-year varsity program from the Tidewater area, was added to the schedule on Friday.

“They had an open date that corresponded with that night,” said Fore. “We were lucky we could get someone. Last year, a number of football programs had to cancel their season at the last minute. We had a couple of holes to fill ourselves, but there were enough free dates that everyone was able to fill the holes on their schedule. We weren't so sure this year, but I think we'll be okay.”

Broadwater Academy was originally scheduled to host Fuqua on Saturday, September 15, but has since filled that date with another opponent. Fuqua is looking for an opponent for that weekend.

With several newcomers, Fore said that schemes will have to be simplified. The Falcons will return to running the unbalanced line.

“It's a simple offense. The blocking schemes are straightforward, and I they should be able to learn it pretty quickly. We've won many games using that offense.

“We'll need to control the ball as much as we can. The last couple of seasons, we were able to score from almost anywhere on the field if Charles [Williams] found a small crack in the defense. We won't have the luxury to get into an 'I score, you score' type of game. In a way, it's more important that we minimize our time on defense. Of course, the best way to do that, is to maximize our time on offense.”

“We've got to keep our morale up,” said FS assistant Walter “Bozo” Addleman, who will return to calling offensive plays for the first time in a decade. “We've got some players we can work with. What we don't have is time. The first thing we told them, is that they were going to have to be sure to listen to us. We can't afford to repeat things too much. They've really done a good job at that today.”

Even so, it's likely to be a long year that could be quickly shortened should the team encounter a rash of injuries. One thing working in the Falcons' favor is that every other team is pretty much in the same boat.

“That's just how it is with schools our size these days,” said Fore. “Everyone, for the most part, is playing with a roster of about 20 players. Theirs may be more experienced in places, but they are also a couple of injuries from maybe, having to make a tough decision.

“We'll have to see, but right now, we're playing football.”