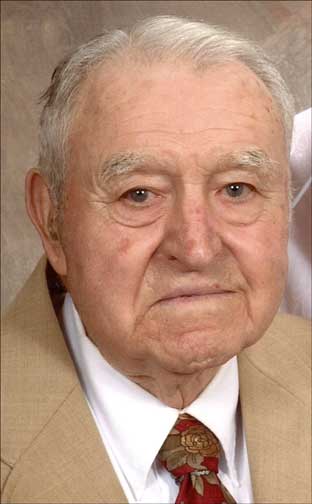 FOREST, August 21 – Cabell Logan Crews, 86, of Forest passed away Saturday, August 18, 2012. He was the loving husband of Margaret Eubank Crews for 57 years. Born October 12, 1925 in Buckingham, he was a son of the late Harry Alexander Crews and Bessie Strasburg Crews.

Mr. Crews was retired from Vaughan Chevrolet & Cadillac and was a longtime faithful member of Heritage United Methodist Church where he was a member of the Adult Bible Class. He enjoyed his hobby of woodworking and gardening and will be greatly missed by his family and many friends.

In addition to his wife he leaves to cherish his memory two sons, C. Wayne Crews and wife, Laura of Hayes, and David Lee Crews and wife, Dreama of Rustburg; two grandchildren, Vincent Tyler Crews and Mary Nicole Crews; step-granddaughter, Sarah Barese; great-grandson, Logan Jacob Crews; brother, James Dabney Crews and wife, June of Buckingham; and many other relatives and friends. In addition to his parents he was preceded in death by a daughter-in-law, Mary Crews, sister, Christine Crews Eades and three brothers, Houston Crews, Jesse Crews, and Eugene Crews.

The family would like to give their heartfelt thanks to Centra Hospice, the Rev. Will Montgomery and the Rev. Megan Saucier for their loving care and support.

A Celebration of Cabell's life and faith was conducted Tuesday, August 21, at Heritage United Methodist Church by the Rev. Will Montgomery with burial in Fort Hill Memorial Park.

Memorial contributions may be made in memory of Cabell Crews to Heritage United Methodist Church, 582 Leesville Road, Lynchburg, VA 24502.

Heritage Funeral Service and Crematory, Lynchburg, assisted the family. Memories and thoughts may be shared with the family at www.heritagefuneralandcremation.com