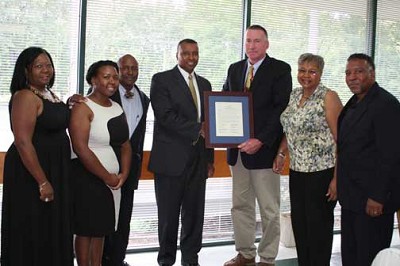 BUCKINGHAM – At the beginning of the August 8 school board meeting, Joan Staton, interim superintendent, read a resolution from the board paying tribute to the life of Allen Gooden, Jr. and extending the board's condolences to his family and friends. The 97-year-old educator and community advocate died on June 30.

Highlighting Gooden's 40-plus years of service as a teacher, coach, principal, and school board member, the resolution honors a man who emphasized “respect toward self, toward others, and for their community.”

Recognizing his role in numerous civic organizations and his leadership during difficult times, the resolution shared, “He served as a blessing and an inspiration to all he came in contact with.”

After Staton read the resolution and the board unanimously adopted it, Chairman Ed Wise presented a framed and signed copy to members of the Gooden family.

Donna Matthews, director of academic services, provided an overview of SOL scores for the 2011-12 school year.

She prefaced her report by sharing there were reservations going into that school year because of the implementation of new SOL math tests. Matthews added that the division did experience the “implementation dip,” an anticipated drop in math scores with the new tests.

Prior to a review of the scores, Matthews said that in another month she would be reporting on the federal Annual Measurable Objectives, which she described as a new term for the AYP, Adequate Yearly Progress. Then, the following month, she would report on accreditation.

Sixth graders at Buckingham County Middle School went up in English to 90, increased in math to 81.82, and scored 85.22 in history.

During the report, Matthews said that although the math scores are down, she did not believe it would affect the accreditation status.

While explaining that the division would continue working with school systems in Region 8 regarding mathematics, Matthews said other divisions experienced similar decreases. “And, we all are very, very concerned about it,” she stated.

Angela Patterson Jones, who served as the lead administrator for summer school, presented an overview of the program.

Prior to the presentation, Matthews explained that due to the anticipated move to the new complex, summer school was shorter and held earlier this year, from June 18 through July 3. She added that one of the disadvantages to the timeframe was a decreased enrollment.

According to Jones, they accomplished a lot in those 12 days. She explained that the summer session included a remedial program for 207 second through eighth graders; High School Project Grad for 25 students; high school credit classes for 17; and an enrichment program for 100 students through Dillwyn Primary's 21st Century Grant.

“There was a lot of learning going on,” said Jones. “I would say that every student who attended summer school definitely improved.”

Jones expressed her appreciation to “the dedicated staff” including those who worked behind the scenes as well as those in the classroom.

Jessica Parker Carroll led off the public comment segment by reiterating her concern that her daughter and approximately 20 other four-year-olds will not be able to attend the Project Four program due to what the school division has described as lack of funding to meet the staffing requirements for additional classes.

Over the last two months, Carroll and other parents have questioned the application and assessment process that determined their children were placed on a waiting list for the program.

This is the first year since the program was implemented that the school division has not been able to accommodate all of the children registered for pre-K, a program that is not mandated by the state.

Carroll told the school board, “I was truly hoping the school board would see the bigger picture and understand that all children need Project Four.” She added, “I have spoken to several teachers in and out of the area and all have agreed that the extra year of learning has truly helped the children.”

Lila Wood, a parent of three children, shared that two of her children attended Project Four. She said the program was an immense help in their socialization and preparing them for kindergarten. Noting that kindergarten is no longer a year spent learning colors and how to write one's name, Wood said Project Four prepares children with the fundamentals for today's kindergarten.

She concluded, “I want my daughter to have the same advantages as the children that are in there and that my sons had.”

Noting the move to the renovated schools at the new Carter G. Woodson Education Complex, the closing of other schools, and on-going budget challenges, Joii West Goodman shared his concerns.

“My primary concern and my primary focus for standing before you today is that I want us to make sure, and maybe this is a comment and a question, whether or not it is that we have a strategic plan to ensure that the quality of our children's education is not diminished,” he said, “Because our children are our future.”

Earlier in the meeting, the board approved its consent agenda as presented. Along with the minutes, audits, bills, and accounts, the agenda included six out-of-zone requests.

Building requests included use of BCMS by Spreading God's Gifts for a fundraiser on September 9; and use of the Carter G. Woodson Education Complex by the Heart of Virginia Council of the Boy Scouts of America for Scout School Night on September 6, from 7 to 8:45 p.m.

In Other Board Action

During a discussion on a recommendation by the superintendent to raise the current $1,000 limit to $5,000 when requiring bids on requisitions for transportation, maintenance, and technology, the board in a unanimous vote, raised the limit to $10,000. However, the board requested email notifications regarding proposed purchases over $5,000.

When recommending the increase, Staton explained that the process of obtaining bids under $5,000 was a huge issue for those three areas. The directors of those departments assured the board that they would continue the practice of checking for the best price before making purchases.

Following a closed session that included the discussion of the award of public contract, school board members unanimously approved a resolution to initiate competitive negotiations for financing the Honeywell lease/purchase contract. The approval included placing an advertisement in the newspaper with bids due by August 24.

Additionally, the board unanimously approved amending the Honeywell maintenance/service contract to include the renovated schools on Route 20 at the Carter G. Woodson Education Complex.

The board also approved awarding the contract for occupational therapy to AIS.

Following the closed session, the board appointed Dr. Cecil Snead as the division's new superintendent. [Full coverage of the appointment and an interview with Snead is available in The Herald's August 10 edition].

The board also approved the personnel agenda as amended in closed session. The action included the resignation of Barbara Hallman, certified occupational therapy assistant.

The board also approved a transfer for Denise Leatherwood from librarian at Buckingham County Elementary School to a fifth grade teaching position.

In other personnel action, the board appointed Joan Staton as a consultant to the incoming superintendent from August 9 through 17.

A Thank-You to Staton

At the conclusion of business, past chairman Acie Allen extended the board's appreciation to Staton for her service as interim superintendent.

He offered, “I think we made the right call. She's done a wonderful job.” As the board expressed its agreement, the audience responded with a round of applause.

Staton shared, “I want to thank the board for allowing me to do it and having the faith and confidence in me.”

Continuing, she stated, “I also want to thank the directors because they helped me through this and the principals have helped me.” Staton added, “It took all of us working together.”

She concluded, “I have thoroughly enjoyed it. Thank you so much and it is a wonderful way to go out into retirement.”

After completing its agenda, the board agreed to continue the meeting to Tuesday, August 28, at 6 p.m., in the Window Room, to review the proposals for financing the Honeywell lease-purchase contract.