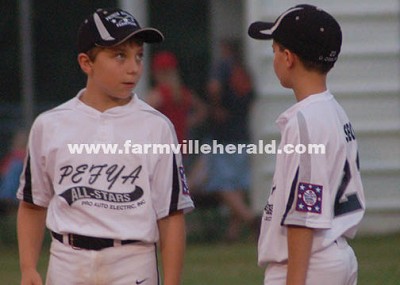 “There's Something On Your Hat”

Prince Edward Farmville shortstop Aaron Weese (left) and second baseman Drew Osborn discuss matters in between innings during Wednesday night's District V Championship Round Game against Dinwiddie American. The PEFYA All-Stars finished the tournament as the runners-up, but will advance to the DYB State Tournament, which is scheduled to begin on July 20 at Parker Park in South Hill. As the District V runners-up, PE Farmville will take on District IV runners-up Buckingham in the 2 p.m. game.