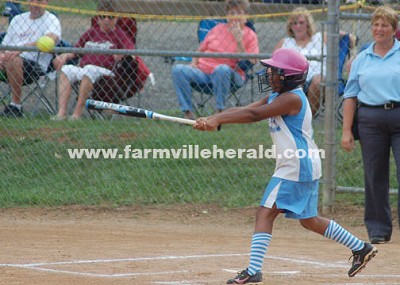 MADISON HEIGHTS – Two games, two runs short. That was the story for the Prince Edward Farmville Darlings All-Stars team in the Dixie Softball State Tournament over the weekend at Amherst's Dixie Softball complex.

PE Farmville lost 21-20 to Halifax American on Friday night, and 16-15 to the tournament hosts on Sunday night.

Well, it was some of the story, anyway.

“I'm just proud of these girls,” said PEFYA manager Raymond Chernault. “The kids came together as a team and played some good softball. We really gelled as a team over these last few weeks.”

Never before has a Prince Edward Farmville softball team qualified for a state tournament by winning a district title (though PEFYA has hosted several state tournaments over the years), which PEFYA did over Brunswick a few weeks ago in the District I Tournament.

Against Amherst, PE Farmville, which was playing as the home team, spotted the tournament hosts seven runs in the first inning, before coming back to score six of their own in the home half of the first.<br />
Alyson Lucas singled and scored, as did Danner Allen, J'Tae Hardy (double), Olivia Elam, Meredith Schmidt, Rachel Chernault and Jayla Ford.

The PE Farmville defense tightened up in the top of the second to keep Amherst off the board. An unassisted double play by Elam helped PE get out of the inning.

PEFYA took the lead in the bottom of the second. Brooke Coleman and Lucas reached base, and scored on a two-RBI double by Hardy to give PE Farmville an 8-7 lead.

PE Farmville got one back in the bottom of the fourth. Elizabeth Hall reached base and scored on an RBI hit by Kayla Knott.

Amherst added an insurance run in the top of the fifth to take a 16-9 lead into the final half inning.

At this level, only ten batters are allowed per half inning. Theoretically, all 10 batters could score, but it's a tall order to get more than seven or eight.

Down seven runs, Prince Edward Farmville wasn't going to be eliminated without putting up a fight.

Hardy led off with a hit and later scored, as did Elam, Schmidt, and Chernault. Ford knocked a run in, but got tagged on a grounder to second. Sydney Baldwin reached on the fielder's choice and later scored, as did Kassidy Barton. A single by Hall scored Barton. With the bases empty and down to their last two batters, Knott and Coleman singled. Coleman's two-out single was fielded cleanly and relayed to home plate to end the PEFYA rally and the game.

“Everyone held their heads up and didn't get down, when we got behind,” said Chernault. “You have to give all the credit to the girls. They responded well.

“We couldn't have gotten here if not for the parents. They were behind us every step of the way. Their support means a lot [when things get tough] and the girls fed off of that.”