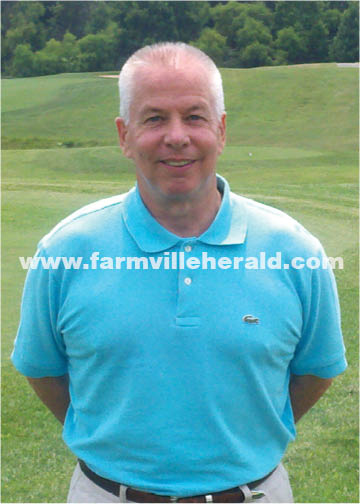 New Golf Professional At The Manor A Familiar Farmville Face

FARMVILLE – The new PGA Golf Professional is living proof that one can indeed go home again.

Mac Main, a third-generation Golf Pro who lived in Farmville while his father was the Golf Professional at Longwood Golf Course, returned to the area in June.

“Home is where you have your most fond memories as a youth growing up,” said Main. “This is home to me. I've made a lot of friends and met a lot of nice people here, and I'm happy to be back living here.”

Main played golf during his junior and senior years at Prince Edward Academy, and after going away to college for a couple of years, returned to Farmville to earn his undergraduate degree at Longwood, where he played golf and helped to start the wrestling program.

After graduation, he became a touring professional, before settling down to become a PGA Pro in 1986.

Settling down may not be the most accurate term. Main has been the Pro at six different courses since he last called Farmville home. His first stop was at The Tides Lodge in Irvington, before he moved on to Faquier Springs C.C. and then the Wintergreen Resort. He moved to the Carolinas as the PGA Professional at The Heritage Club in Pawley's Island, SC, Myrtle Beach's oldest golf course, Pine Lakes International, and then to the Grandover Resort in Greensboro, NC.

What a long semi-strange trip it's been.

“Yeah, I've had a long road with a lot of stops in between,” said Main.

Some of his best memories are when his father worked for Longwood and helped the Hampden-Sydney golf team.

“He helped two or three become All-Americans and one [Woody Fitzhugh] made the tour. Gray Tuttle called me as soon as I came to work here and said 'I want you to do for my son what your father did for me.' That was a great compliment for my father and for me.”

Main has maintained some close ties to the area. He's played in annual golf tournaments at both Hampden-Sydney and Fuqua School.

Now, he's here on a full-time basis at a place he feels is underrated.

“The Manor is one of the nicest courses in the state,” said Main. “I've played a lot of rounds at a lot of places. This place is good for the area. Both colleges use this course, and I know it's a tremendous recruiting tool for all three programs.”

Of course, he gets paid to say that, but Main sees his profession as larger than promoting any one course.

“For me it's to promote the game of golf. Obviously, I want to promote The Manor, but I want everyone to experience golf, regardless of what course you play. This is a sport someone can play for a lifetime.”

One of his goals is to build up a loyal customer base, both locally and from around the state and region through different promotions.

“One [promotion] is to advertise a limited time local rate. We want to attract play from all areas. This is not a destination, per-se, but it is a good stopping off point for people who are traveling down to Myrtle Beach or Pinehurst. If there is a good course along the way, people will go a little out of their way to play that course. If we market it properly we can be that, and that will help more businesses than just the golf course.”

That is not unlike a baseball team that can draw a good walk-up crowd. However, Main knows that much like that baseball team, sustained success is built in memberships.

“We want to also market it locally to a core within a 100 mile radius – to individuals and businesses. A lot of business deals get done on the golf course.”

Having bent grass from tee to green gives The Manor a unique feature among courses in Southside Virginia.

“Most of the time, the courses that have bent grass from tee to green are the private country clubs. It costs quite a bit to maintain, because it's a very delicate form of grass. But people who are knowledgeable in golf, recognize the quality in a course like this. They know what bent grass means.

Main's vision is for The Manor to be the first course people think of when they look to head to the links. He said that the new ownership group (Traditional Golf Properties) is committed to growing the course.

“The goal is to maintain our excellent standards,” said Main. “Mike Zelley, our superintendent, has done a wonderful job with the course. He's had good training, and is well-versed in how to maintain the turf.

“The course is in great shape. Bent grass will stress a little bit in August and September, but right now, it's in excellent condition.”