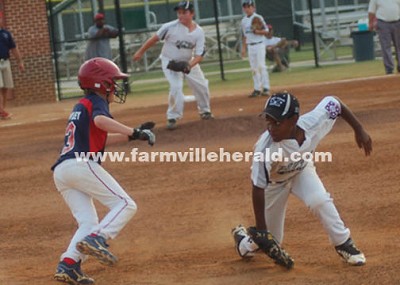 Prince Edward Farmville first baseman Isaiah Dailey tracks a loose ball in foul territory as he and a Dinwiddie American runner circle around one-another in the first inning of Tuesday night's District V Championship game. The runner advanced to second, but the PE defense did a good job all weekend of keeping mistakes to a minimum, and when they did happen, making sure they didn't compound it with another.