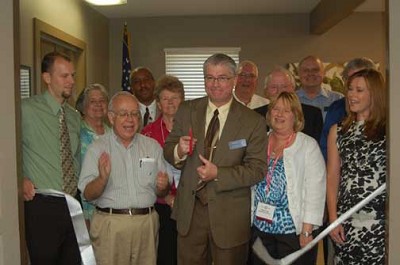 Patrick Henry Boys and Girls Homes are continuing to expand their services in order to help children and families at risk. With the opening of the Hope for Tomorrow Counseling Center in Farmville on June 21, Farmville is now officially a part of Patrick Henry's mission.

“Patrick Henry has been caring for boys and girls for 50 years in our group home settings,” Executive Director Robert Day commented in a recent interview in Farmville. “Children come to us because there's dysfunction in the home, there's hurt, there's something happening in the family. In our desire to max out our mission of rescuing these kids we recognize the key ingredients of a family, so we started a counseling center. We wanted to not only care for our children, we wanted to use counseling as a preventive. With one hand we're parents of children in our homes, and with the other we're trying to keep those children from coming to our homes.”

The first counseling center opened in Lynchburg in 2007.

“Hope for Tomorrow is the name of our counseling ministry,” Day related. “In June, 2011, we opened a second counseling center in South Boston. We thought it would do well, but we were surprised how well. Last year we cared for a total of 148 clients in the South Boston center, including 58 children under 18 years old. That's exactly who we wanted to reach. As soon as we opened the door, professionals started sending us clients.”

As with the other two counseling centers, referrals to Farmville's facility, located in the former Farmville-Prince Edward Library building, will come from educators, doctors, and other professionals.

Day sees Farmville as the perfect location for the new center.

“We felt that the Farmville community would help us,” he said. “We have had a lot of support from the Farmville area in the past. It's also ideal strategically since Prince Edward has become the hub for the counties surrounding it. If we offer services in Farmville, we can actually reach into seven counties.”

“We offer professional, licensed, Christian counselors,” Day added. “We have the same commitment in our counseling centers as we do in our children's homes in that inability to pay is not going to be an issue. We have a generous sliding scale.”

Patrick Henry's funding, Day explained, comes from a solid base of supporters.

“We've been blessed over the last 50 years with a base of supporters,” Day noted. “We have resources that serve as an endowment that allow us to expand as we're doing here. Right now when many non-profits are reeling back because they're losing their government resources, we're actually expanding.”

“When our kids turn 18 they still need family,” Day said. “This program offers assistance with finding a job, writing a resume, or health care needs. For those who qualify we also provide housing. To be 18 with no real job experience and suddenly be out of foster care – that's a tough transition.”

Another Patrick Henry ministry that will be available next year is a summer camp for at-risk children.

“Hat Creek Camp was a church camp in Campbell County,” Day said. “We're getting it up and running now. Our goal is to open a summer camp there in 2013.”

Patrick Henry homes and other ministries do not accept government funding.

“The children in our homes are placed there voluntarily,” Day added.

Patrick Henry group homes accept children between the ages of six and 18 and have an average population of 50 to 60.

In recent years, Day has noted an increase in one population – children from overseas adoptions.

“We currently have two from Russia, one from Thailand, one from Ethiopia, and one from Brazil,” he related. “Somewhere along the line the adoptive family has said – we're not going to do this anymore.”

Patrick Henry has two plans or tracts for the children in their group homes.

“We care for two kinds of kids,” Day observed. “Kids who have nowhere to go and kids who are going nowhere.”

“Children in the family reunification tract are those we believe can be reunited with their families,” Day explained. “Our second tract is what we call independent living. With these children our goal is to get them ready for living on their own because they're going to be with us until they turn 18.”

The preferred choice, of course, is reuniting the family. Patrick Henry homes schedule two breaks during the year, one after classes end in June and the other at Christmas.

“Even at Christmas we have to have an open cottage – one for boys and one for girls,” Day said. “We always have some children that can't go home. That breaks your heart.”

“My first home was a group home,” Day related. “My mom was 16 when she gave birth to me. She was placed in a foster home, and I was later placed in the same home. When she turned 18 she left and took me with her. It was just one long life of dysfunction. I was in and out of foster care in a number of places, so I have a personal passion about it.”

“I chose two careers,” he said. “I have a master's in social work and later I received a master's degree in divinity. Most of my professional life has been in child welfare-type agencies.”

“When the position at Patrick Henry became available it felt like everything I had been doing both professionally and personally led me to this,” Day added. “I just celebrated two years there – it's a great organization.”

Patrick Henry Boys and Girls Homes have their share of success stories as well.

“We just held our award ceremony for the year,” Day said. “We bring in all the kids and as many of the family members as will come. There are a number of awards – like most improved and best academic. A lot of our alumni will come back for the award ceremony too.”

This year's speaker was a Patrick Henry graduate from 1999.

“He told the kids, 'It's going to be all right. These people here really do love you, so don't reject that,'” Day related.

This year's awards speaker, currently an EMT in Roanoke, is one of Patrick Henry's success stories.

“He received a hero's award for saving a man's life,” Day noted with pride.

Saving lives is, in fact, the goal of all Patrick Henry ministries.

“It takes all of us working together as a community,” Day concluded. “Our goal at Patrick Henry is making a difference – one life at a time.”

PRINCE EDWARD – County school board members met last week to close the books on the fiscal year, but they... read more