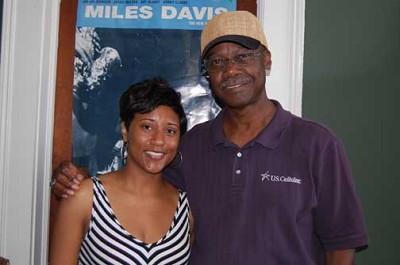 Carrington Is Ready To 'Go Even Further'

FARMVILLE – Bridget Carrington's performance of The Rolling Stones' “Gimme Shelter” on Duet's final broadcast the week after her elimination will not be the coda to her national spotlight.

Not if she has anything to sing about it.

To wow the show's producers so much that they asked her back, despite her elimination, may prove prophetic.

The show's over but she is not.

“It's made me want to definitely keep doing it. I'm a little older now. I'm 35. I'm used to working all my life. So I'm not working right now and I'm trying to make a go at this,” the 1995 Prince Edward County High School graduate said during an interview at The Herald.

“Honestly,” she said of her take-away from the Duets experience, “I just learned to go for whatever you want to do in your life.”

Carrington, the daughter of Mickie and Perry Carrington of Farmville, has recording plans and the future may include continued musical collaboration with her Duets superstar partner/mentor, nine-time Grammy-winner, John Legend.

“I have touched base with John Legend since the show and I've actually gotten in touch with some of his producers, so they're going to be working with me,” she said.

Legend, she continued, “…he's going to try to write some stuff for me and hopefully record something with me” after he fininshes his current musical project.

The Duets experience, Carrington said, “makes me want to go even further. Because I've always wanted to do it but now that I have gotten a little taste of it I just can't stop.”

Her surprise reprise on the show's final telecast adds to the impact her Duets experience is having on her life.

“The week I got eliminated I was supposed to sing the Rolling Stones' 'Gimme Shelter.' But I got eliminated and I wasn't able to sing it. But all during rehearsals that week the producers and directors were talking about how great the song was and they had to let me sing it,” she said.

An encore was arranged.

“They kind of changed the finale around to make sure that I got to sing it,” she explained. “That was pretty nice of them. I have to thank everybody because they didn't have to do that.”

Carrington has nothing but praise for Legend.

“John Legend was a great mentor. He's very kind and patient. He just wanted to me to do my best,” she said, “and he helped me out as much as he could.

“I think that some of our songs, we didn't get the popular vote but I think he made good song selections for my voice,” Carrington continued, “but we competed with some of the bigger songs and I think America wants to vote for those.

“But it's okay. I went, I was fourth place so I felt so good about that. Working with everybody, Jennifer Nettles, Kelly Clarkson, Robert Thicke, everybody was great, everybody gave advice, and everybody was helpful.”

Carrington said she “didn't have a lot of input” into selecting the songs she sung with Legend in the competition.

“I think he (Legend) thought he knew my voice and that's why he picked some songs he did,” she related.

Carrington credits her father for teaching her how to duet. And it was Perry who told Bridget about the Duets competition in the first place.

“We have three daughters and Bridget's the youngest. We had a choir that you had to be a certain age to sing on and she wasn't that age and she used to beg me to let her sing,” Perry said in an interview this summer, “and I wouldn't because she wasn't old enough. But finally I bent the rules and let her get in the choir…Bridget at six and seven years old could hold harmony just like an adult and she could sing all of the parts, she knows all of the music.”

With her father and sisters, they then began performing as Perry's Angels for several years.

“And basically from that point on she has never stopped singing. And that's been her goal in life, to be a professional singer…and she's never given up…

Carrington said she had heard some complaints that Duets was “boring” because the superstar panel didn't have someone like Simon Cowell. There were no acid put-downs.

“Because nobody was being mean,” she said.

The lack of meanness was not missed by the singers competing for first place and the recording contract that came with it.

“Everybody was very helpful and positive so I just take lots of things from the experience because it was a great learning experience,” Carrington said. “We were glad they weren't like that and they had constructive criticism instead of just trying shock value. Everybody was great. No egos involved.”

The first few episodes of Duets were pre-recorded, with the final shows-when America voted who continued competing and who went home-broadcast live on ABC.

The shift to live broadcast did not intimidate Carrington.

“We performed it as if it were live, even when it was pre-recorded, because we didn't get to do another take. So it was basically the same because you had a live audience,” she said of the pre-recorded episodes. “It just wasn't live for America.

It wasn't that different but you did think about it…'Oh, my goodness,” she says, with a smile, “don't let me fall…'”

FARMVILLE – The Town of Farmville wants residents to voluntarily restrict their water use following the declaration by the Department... read more