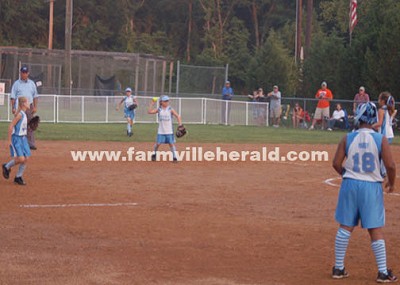 Prince Edward Farmville All-Stars Darlings second base player Olivia Elam gets set to toss the ball back to the circle during Monday night's game in the Dixie Softball District I Tournament held in Lawrenceville. As of the Herald's deadline on Tuesday afternoon, the PE Farmville Darlings were still alive with one loss in the elimination bracket. The Prince Edward All-Stars edged Lunenburg 11-10 on Friday, and then Emporia 16-12 on Saturday. Following a bye on Sunday, PEFYA dropped a 6-2 decision to tournament host Brunswick. The All-Stars were scheduled to play Blackstone on Tuesday night. The winner will advance to Wednesday's championship round.