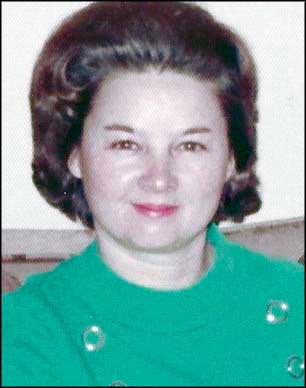 JUNE 12 – Carolyn Childrey Overby, 75, of Richmond, passed away Monday, June 11, 2012 at the Woodland Nursing Home in Farmville. She was the wife of Lowell Thomas Overby.

Mrs. Overby was born in Halifax County, August 6, 1936, a daughter of the late William Childrey and Mattie Betterton Childrey. She was a member of Clover Bottom Baptist Church.

In addition to her husband, she is survived by a son, Victor Ray Overby (Dianne) of Richmond; a daughter, Lisa Overby Crone (Steve) of Cumberland; two grandchildren, Elaine and Clyde Crone both of Cumberland; four brothers, Mitchell Childrey (Charlotte) of Danville, Roy Childrey (Hazel) of Madison Heights, Bill Childrey (Carolyn) of South Boston and John Childrey of Culpepper. She was preceded in death by a brother, Victor Childrey.

A funeral service will be conducted at 11 a.m. Thursday, June 14, at Clover Bottom Baptist Church by Charles Overby and the Rev. Francisco Muniz with interment to follow in the church cemetery.

The family will receive friends from 6:30-8 p.m. Wednesday, June 13 at Henderson Funeral Home and Cremation Service.

Henderson Funeral Home and Cremation Service, Brookneal, is in charge of arrangements.