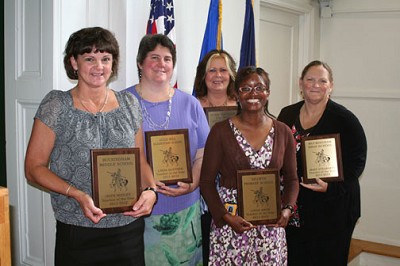 Buckingham Honors Teachers Of The Year

BUCKINGHAM – Student recognitions literally took center stage at the May meeting of the Buckingham County School Board.

The board began the meeting in the auditorium of Buckingham County High School for its end-of-the year student awards program.

“We are really proud of everybody,” said Blair before explaining the order of the awards.

When their names were called, each student went to the stage where they received a certificate acknowledging their accomplishments. Then, as they walked across the stage, Superintendent Gary Blair and each school board member congratulated them.

[Photos of the award-winning students will be featured in an upcoming edition.]

Teachers of the Year

After the student recognitions, Brian Green, director of personnel, called all principals to the stage to announce their respective school's Teacher of the Year.

Green explained that it has been years since the school division has recognized teachers with this prestigious award, which he said is associated with the state's award.

According to Green, one of teachers from those being honored will be named the Teacher of the Year for Buckingham County. That individual will then compete at the state level.

He explained that the teachers were selected based on a number of criteria including their concern for individual students, their ability to inspire learning, their ability to raise up students and staff; and their willingness to devote endless time and energy that results in improved instruction for the children.

Pennie Allen, principal of Dillwyn Primary School, shared that it was really tough to select just one teacher to receive the honor in a school with many creative and really great teachers.

“But, my final candidate is Linda Amos,” announced Allen.

In the absence of Gold Hill Principal Jennifer Grazier, Green announced that Linda Ruffner was that school's Teacher of the Year.

Green offered, “My wife works at Gold Hill and says that Ms. Ruffner is absolutely the best.”

Joan Staton, principal of Dillwyn Elementary School and Buckingham Primary School, shared that the staff at each of those schools wanted to nominate the entire teaching staff because of the team effort exhibited at each of the schools.

“I really admired them and it inspired me,” she stated. “And, I know that they truly do work as a team.”

O'Brien shared that when she saw the teacher in the classroom that first year, she could not believe she was a new teacher. “A lot of people discuss whether teachers are born or made. There's no question-this teacher was born to teach,” she offered, as she announced that Hope Motley was the BCMS Teacher of the Year.

Roger Coleman, principal of Buckingham County High School, announced that Mary Stearrett is that school's Teacher of the Year.

Kyle Bryan, principal of the Career and Technical Education Center, recognized Sandra Hawk as the CTE Teacher of the Year.

He offered, “Ms. Hawk helps anybody who needs help.” Bryan said that Hawk, who has taught Culinary Arts for 15 years, sponsored a team that won first place in state level culinary competition this year.

Before a presentation by Dr. Paula Gastenveld, Dean of Instruction at SVCC, and Laurie Michaelson, Coordinator of Off-Campus Instruction, on the dual enrollment program through Southside Virginia Community College, Dr Blair shared that in the past four years BCHS has gone from having two students to 23 to complete programs through SVCC.

“We are here to say we are very appreciative of the partnership that we have with your school system, your superintendent, and your principals,” shared Gastenveld. “Fifteen of your students will graduate from Southside on Saturday with an associate's degree. Another six will get a career certificate in nursing aide and two more will get a general education certificate.”

The SVCC representatives shared a video presentation about the dual enrollment program.

After the video, Gastenveld explained that one of the goals was to see that as many high school students as possible can complete at least one college course by the time they graduate from high school. “That way they will know that they can go to college,” she said, noting that along with its academic curriculum, SVCC also offers numerous technical programs.

At the conclusion of the presentation, Donna Matthews, director of academic services, explained that the dual enrollment courses offered at the high school cost the division nothing because they are reimbursed for the tuition they pay. “That has been a huge savings for us,” she stated. She added that they use funds from the gifted program to take care of the science and humanities program.

Matthews added that Bryan is working on the possibility of being able to offer a dual enrollment program for welding students.

During its April meeting, the board reviewed and discussed several school calendar options.

At that time, Matthews shared that they surveyed the staff and Option 1 was their first choice. She explained that Option 1 was very similar to this year's calendar.

During that April meeting, Chairman Allen encouraged the board to review the calendar options, discuss them with their constituents, and be prepared for a vote at the May meeting.

Subsequently, the board, in a unanimous vote, approved Option 1 for the 2012-13 school year.

Concurring with a recommendation by Paul Imig, financial advisor, the board voted to revise the FY12 budget by transferring $300,000 from instruction to transportation; and transferring $150,000 from technology to $75,000 for administration, attendance, and health, and $75,000 for operation and maintenance.

Imig explained that with the recommended changes, the FY13 budget would be balanced. He noted that the revisions include the addition of a pre-kindergarten class, which adds two positions to the payroll, a pre-k teacher and an aide.

According to Imig, the budget reflects the closing of Gold Hill and the opening of the elementary complex and staffing that. He said the budget includes numerous personnel changes-retirements, reduction in force, and consolidation of jobs.

“The toughest part was trying to calculate the payroll and the benefits and make that fit into the limitations-the limitations being the total revenue,” shared Imig.

Explaining the difficulty addressing the state mandate regarding VRS and employees paying their portion, Imig said the ideal was to accommodate the five percent. “But we ended up with two percent. So we are recommending, and that is what is in the budget, increasing the employees salaries two percent and they would start paying a two percent contribution to VRS,” he stated, adding that the money “just wasn't there” to accommodate the five percent.

Imig requested that the board approve the $21,053,151 budget so it could be presented to the board of supervisors for its approval.

Following Imig's overview of the changes, the board unanimously approved the budget as presented.

“This has been a Herculean effort on everybody's part,” stated Dr. Blair. “It's been an education for all of us.” He added, “As sad as it is with revenues down, we provided some stability to the process.”

Expressing his appreciation to everyone involved in the process, Blair offered a special thank-you to Sandra Wier, the division's new financial officer, and Imig for their efforts.

After approving the budget, the board approved two resolutions dealing with the VRS contributions.

However, the motion on the second resolution was amended to reflect any necessary adjustments to member contributions for Plan 2 employees as required by VRS.

Blair advised that they had received a request from Patti Branch, FBLA advisor, requesting the board's financial support for $3,440 for four students and two advisors to attend the FBLA National Leadership Conference in San Antonio, Texas, this summer.

In her letter, Branch said that the students would compete at the national level in the Business Multimedia Presentation category. She added that one of the students is also a state officer who would be helping with the state meeting at the conference.

Branch wrote that the FBLA has raised $1,000 for the trip and they anticipate receiving an additional $1,500 in funding for the trip, which is expected to cost approximately $5,400.

Christian led with the successful motion to approve the funding. Allen abstained.

Betty Shapiro, representing Heartland Horse Heroes, a non-profit organization that offers therapeutic riding programs for children with special needs, thanked the board for allowing the CTE carpentry class to build a run-in shed at Sprouses Ranch.

Shapiro explained that the run-in shed is used to house the horses while they are waiting for their sessions with children.

She shared that the carpentry students, under the direction of their teacher Brandon Savage, did a great job. “What they left us with was a beautiful 12 by 18-foot run-in shed that will be there for many, many years,” said Shapiro. “They did it right.”

Continuing, she offered, “I want you all to know that you should be very, very proud of them. These guys will take with them the knowledge of how to use something that will be built on many agricultural sites around our county and others.”

She added, “We at Heartland Horse Heroes really do appreciate you giving that go-ahead to build it.”

Savage introduced the students involved in the project. “They did a really good job,” he stated.

Chairman Acie Allen thanked the students and their instructor. He offered, “This is what it is all about-the schools giving back to the community as well as working together.”

In Other Board Action

The board approved its consent agenda as presented.

Concurring with the superintendent's recommendation to approve the VSBA insurance proposal for FY 13, the board voted unanimously to do so.

Green explained that the proposal represents a one percent increase for next year. However, he added that once Gold Hill and Dillwyn Primary are vacated, the rate would be reduced.

Following a closed session, the board approved its personnel agenda as presented.

The action included the retirement of Eileen Miller, bus driver; and, the resignation of David Glasscock, a special education teacher at Dillwyn Primary.

Appointments included Sandra Wier as clerk of the school board effective July 1; and Danielle Minnick, BCMS and BCHS band and choral director.

The board also approved contracts for FY 13 and the FY 13 salary scales.

Cumberland Teachers Of The Year Named