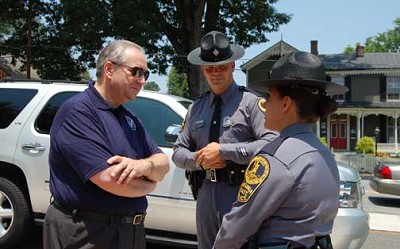 While speaking, Bolling advised the participants from all across the Commonwealth, totaling over 600, to become involved in government and to communicate this one message, “What happens in the halls of government matters. You get what you vote for.”

Bolling, a Republican, became the 40th Lt. Governor of Virginia in 2005 and was re-elected to that seat for another four-year term in 2009. Prior to that he served for 10 years in Virginia's State Senate and earlier on he was on the Chairman of the Hanover County Board of Supervisors.

“I want to thank you for your interest in the government and in politics,” he offered Girls State while speaking in Jarman Auditorium.

“You all are the exception rather than the rule. Most young folks your age really aren't interested in the government or in politics… I commend you for that and the truth is that… what happens in the halls of government matters,” he said. “It has an impact on your life, on your family, on your business. It matters-for the positive or for the negative. It matters and there are a lot of people out there who like to complain about how government works or how it doesn't work but then they don't care enough to get involved in the process of government and sometimes they don't even care enough to go to the polls and vote.”

Bolling added, “If you don't participate in the process then you have no right to complain…”

Bolling also announced he's running for the Republican nomination for Governor in the 2013 election and told Girls State about kicking off his campaign when asked by one participant.

“I've already announced my candidacy for the Republican nomination for Governor for 2013” he replied. “That campaign is already kind of well on its way but it's kind of well underneath the radar screen…Behind the scenes, there is a lot of work we're doing to get ready for the 2013 campaign for Governor and we'll see how it goes.”

About the Lt. Governor's beliefs and campaigning, he said, when asked, “I believe most people will tell you that Bill Bolling is a conservative guy who believes in a conservative approach to government. But he's able to sit down and work with people on both sides of the political aisle to get things done…”

He added a little advice, “You aren't always going to agree with me on everything but hopefully you'll agree with me on what I believe is best for Virginia to help make it a place to live and work and raise a family…”

At the end of the day, Bolling says he will fight for what he believes in but also sit down and roll up his sleeves and work with people to get things accomplished.

Related to job creation in Virginia, Bolling advised Girls State that the “government does not create jobs.”

After one question was posed, Bolling noted that job creation begins in the “private sector.”

Bolling noted several instances where Virginia has worked towards marketing Virginia and being “business-favorable.”

He specifically stated how Virginia has invested approximately $125 million in new money towards economic development and job creation programs.

Bolling also said that there has been 819 economic development deals closed in Virginia and 130,000 net new jobs created.

“We still have a lot of work to do because there are still over 200,000 Virginians looking for a job,” he said. “And when the recession started here in Virginia the unemployment rate was 3.14 percent. Although we are very pleased with our progress we've made we aren't taking a victory lap. There is a lot of work to be done.”

The Girls State participants also didn't leave out the topic of technology when meeting with the Lt. Governor.

He advised them about technology assisting with communication and told them to “friend” him on Facebook and to follow him on Twitter and to visit also his website for more details pertaining to his office and work for Virginia.

“You can find me on Facebook and friend me there and I'd love to have you do that,” he laughed. “…I just communicate with people and let them know what's going on.”

Related to the government aspect of technology, Bolling advised them that computer chips replaced tobacco as the “largest export” from Virginia but that technology is changing “dramatically.”

Concerning the United States being competitive, he added, “If we want to compete in the 21st Century global marketplace with the Chinese, Koreans, and the Indians, frankly a lot of these areas are kicking our butt today, we've got a lot of work today as a Country and as a people so it's a whole technological revolution that will continue to go on…”

Several Girls State participants asked for advice on how to relay the message about the importance of becoming involved in government and politics.

Bolling responded by agreeing with the necessity to “get more people involved.”

He said believes so many people are “disinterested” in government.

“They look to the national level and the government, particularly at the national level, seems to be incapable of getting anything done and that's pretty frustrating to people,” he told them. “Everything in government is about these rigid ideologies or it's about hyper-partisan politics. Everything seems to be about conflict, confrontation, or controversy. That's not where most people live…”

“You cannot govern effectively from the extremes,” he said. “…Most people just live in the middle someplace. Most people aren't Republicans or Democrats. They don't consider themselves liberals or conservatives and frankly they don't give a rip about partisan labels or philosophical labels.”

According to Bolling, people only really want two things.

They want the government to leave them alone and in the legitimate role of the government, people want it to “get things done,” he said.

“Just solve problems,” he continued. “So they get very frustrated when government is polarized and seemingly incapable of getting anything done.”

About communicating the message about becoming involved, Bolling told Girls State participants to “be very honest with folks.”

The first would be to allow its governor to serve more than one term.

“Sometimes it's good to be the only one doing something but in this case I'm not sure it is,” he said. “I'd like to see us change our Constitution so that the governor can succeed himself and serve two terms.”

The third thing: Bolling would like to see more leadership duties given to the Lt. Governor by the Governor just as what has occurred between Governor McDonnell and himself, he said.

“I think we have succeeded in redefining the office of Lt. Governor and I hope that will continue with whoever the next Lt. Governor will be,” he noted.

“I think we've fallen in our state in a trap in what I call a one-size-fits-all approach for public education,” he said. “When you do that you tend to leave people out on both ends and you end of teaching in the middle and, you know, I think we need to do a better job of emphasizing more choices and more flexibility in public education than we have today.”

“I think we just need to provide a lot more flexibility and identify earlier on the paths that the student wants to take,” he said concerning a future in college or being workforce ready.

“I remember years ago when we started the Standards of Learning program in public schools in Virginia and it was terribly controversial because of some of the standards and expectations that were there. Sometimes say should we lower those expectations or do away with those expectations? I say 'no.' They should be higher than they are.”

Bolling noted that students in the United States are rated as low as 17th to 25th among other nations in the world.

“That's unacceptable,” he said. “We just can't excel in a global marketplace when our students in core subjects…are ranking 17th or 20th or 25th in the world. The United States ought to be first in everything we do. We should be first and that ought to be the goal.”

Related to college education opportunities in Virginia, Bolling's goal is to always have this opportunity remain “available' and “affordable,” he said.

Bolling, who was living in West Virginia at the time, participated in Boys State there and also assisted in his first political campaign earlier when he was 15 years old, he said.

“My passion for politics kindled there and it never went away,” he said. “And I hope that will be the case for you. I hope it is kindled for you and it will never go away.”

He also said that the first woman president of the United States was probably sitting in the audience.

Bolling explained to the Girls State participants about what exactly he does as Lt. Governor of Virginia.

His primary duties, he said, are to succeed the governor in the event that he's not able to fulfill the terms or conditions of his office and to preside over the State Senate.

“…Three years ago when Governor McDonnell and I were elected we decided that we wanted to define the office of Lt. Governor because we felt that there was just a lot more that the Lt. Governor could do to be a meaningful partner in state government. So we've done a few things different.”

Bolling is the first Lt. Governor that has been asked to serve on the Governor's Cabinet and the first to be given specific duties within his administration.

“I'm responsible for heading up our state's economic development and jobs creation and I've loved it,” he said.

This year in Virginia Bolling had to cast tie breaking votes 33 different times in the Senate.

“It was an interesting year in the State Senate because we had 20 Republicans and 20 Democrats,” he said. “…A lot of decisions fall to the Lt. Governor to cast a deciding vote on… I just think that through all of this that people are beginning to see that it really does matter who occupies this office of Lt. Governor and the relationship they have with the Governor…”

FARMVILLE – Farmville and the surrounding seven-county area are poised to become PACE-setters later this year. PACE stands for a... read more