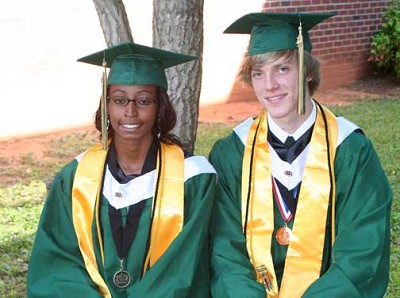 BUCKINGHAM – They filed into the gymnasium of Buckingham County High School on Saturday morning exhibiting a mixture of emotions. Some beamed smiles as broad as their mortarboard caps while others brushed away a tear or two after eyeing a family member in the bleachers.

Much like the word commencement conveys the approximately 140 soon-to-be graduates seemed to realize that the ceremony was, indeed, both an ending and a beginning. Yes, they were about to receive their diplomas, signifying the end of 13 years of education; but, they were also beginning the journey into their futures.

After welcoming everyone, Elynn Lee, class president, offered a quote from Dr. Seuss that fittingly summed up their status.

She shared, “We have brains in our head. We have feet in our shoes. We can steer ourselves in any direction we choose. We are now on our own. And we know what we know. We are the ones who'll decide where it is we will go.”

Reminding her classmates of their many accomplishments, Lee shared that the class made history by earning the largest number of associate degrees achieved thus far by BCHS seniors.

“Our Junior ROTC program continues to receive the Honor Unit with Distinction Award and our Culinary Arts Program was chosen as the Hot 100,” said Lee, adding that athletically, they continued to shine and received awards and recognition at district, regional and state levels.

She told her classmates, “Regardless of the path we have chosen, we are intelligent, we are humble, we are talented, we are ambition, we are strong, we are courageous, we are extraordinary, we are exceptional, we are and will be successful.”

Lee, drawing from the class motto framed by Albert Einstein, offered, “We will 'Remember Yesterday, Live for Today, and Dream for Tomorrow.'” She added, “Our commencement is not the end-it's the beginning. God bless us all.”

Principal Roger Coleman told the audience, “This is an awesome moment in time for Buckingham County High School and our community.” Welcoming everyone, he shared, “We take great pride in having our parents, guardians, family members and friends with us.”

Addressing the students, Coleman offered, “Most of you can look back on those frightening first few days as a freshman in high school and perhaps smile at the terrified person you were.” He added, “But underneath that daunting exterior was a person on a mission to succeed.”

He told the class, “You now have learned what it takes to be successful. You know success doesn't just happen-you have to make it happen.” The principal added, “Because of that, each of you is a winner.”

Coleman shared, “As you graduate from Buckingham County High School today, you have attained the key to the gateway of unlimited possibilities. By attaining your goals, you have the strength and ability to move forward.”

He explained to the students that they were graduating into a community that collaborates and epitomizes what it takes for everyone to be victorious.

Coleman charged the students to be supportive, successful, positive, and productive citizens of society and never lose sight of their start in Buckingham County.

Thanking the students for the memorable experiences he shared with them as their principal, Coleman stated, “It has truly been an honor and a privilege.”

Coleman also expressed his appreciation to Superintendent Dr. Gary Blair and the Buckingham County School Board for their tremendous support during the year.

“Their hours of hard work, support, and concern have enabled us to achieve the excellence that is demonstrated by the outstanding success of our senior class,” shared the principal.

Dr. Linda Sheffield, representing Southside Virginia Community College, recognized students who, along with earning their high school diplomas, also earned either a certificate or an associate degree from SVCC.

Before announcing the names of those students, Sheffield shared that being in the gymnasium brought back the trepidation she felt as a high school student when her basketball team would come to BCHS for a game.

“Every time we came here to play the girls team, we had the soup kicked out of us,” said Sheffield, drawing a round of laughter from the audience.

Explaining that the students participated in graduation at SVCC on May 12, Sheffield said that 15 BCHS seniors earned associate degrees, one student received a certificate in general education, and six received certificates in career studies.

After Sheffield's presentation, Coleman introduced the honor graduates, seniors who earned an academic average of 93 or above.

After congratulating those students for maintaining high academic standards, Coleman introduced students who qualified for the state's Early College Scholars Program. To do so, a student must concurrently earn at least 15 hours of transferrable credits toward a college degree.

Next Coleman recognized students who qualified as Commonwealth Scholars, a college preparatory academic program that encourages all students to take a more challenging course of study during high school.

Following the accolades for scholarly achievements, Coleman introduced Tiffany Spencer, Salutatorian for the Class of 2012.

He explained that the salutatorian has the second highest academic average in the senior class, based on grades 8 through 12.

Coleman shared that Tiffany is the daughter of Wanda Spencer and Godfrey Vaughan.

According to the principal, Spencer is a member of SCA, BETA, FBLA, Project Discovery, Straight Street, Project ASK, and the National Honor Society.

During the summer of 2010, she was a student ambassador in Italy through the People-to-People program. As a member of Holy Trinity Baptist Church, Spencer serves as an usher and a member of the youth choir.

Coleman shared that Spencer earned her Associate's Degree in Arts and Sciences through the Southside Virginia Governor's School and will be attending Spellman College, where she plans to major in music education.

After receiving her salutatorian medal from Coleman, the young woman stood before her classmates and shared, “First I want to thank God for allowing us all to make it to this day-it's been a long time coming.”

Spencer explained that she was going to attempt to recognize her classmates and the way they approached, handled, and conquered high school. “This will be sort of like a roll call of shout-outs and recognition.”

From those who “stayed up until two in the morning studying for government or writing papers” to “those who played Yu-gi-oh card games during lunch” to “those who skipped school to go hunting” to “those who ignored their teachers' lectures while playing temple run,” to “those who built and cherished friendships” and to “those who loved and lost,” Spencer covered the gamut of her classmates' activities.

“Whether you took on a full course load for your senior year or decided to breeze through it…whether you loved high school or hated it, the point is, we all made it,” she shared, offering her congratulations to her classmates.

Introducing Johnathan Dick, II, the student with the highest academic average, Coleman shared that the valedictorian is the son of Johnathan and Rita Dick. He attends Powhatan Community Church.

According to Coleman, Dick is a member of BETA, Straight Street, Scholastic Bowl, FBLA, and the National Honor Society.

He served as Buckingham's representative to Virginia Boy's State in 2011 and was selected for the Who's Who Among Students in American Universities and Colleges. During the summer of 2011, he also participated in a mission trip to Macedonia.

The top grad earned an Associate's Degree in Arts and Science through the Southside Virginia Governor's School and will attend Liberty University where he plans to major in global studies and graphic design.

According to Coleman, the young scholar's career goal is to work as a full-time missionary or as a graphic design specialist for the International Missions Board.

Sharing that he felt like he had swallowed a bucket of butterflies, Dick began by thanking those who helped him make it through high school.

“I wouldn't be where I am today without the people in my family, my mom and dad, my close friends, and especially my God,” stated Dick, adding a thank-you to the high school staff and administration.

He shared what he described as “a sort of metaphor for high school” as he compared the writing prompts for English SOLs to high school being a prompt for the beginning of adulthood.

“And like those prompts we are all so familiar with, we either loved our 'high school prompt,' or we hated it,” said Dick.

“Whatever prompt you feel like you were dealt, the point is this-no one wrote the same thing,” he offered. “So no, I really can't speak to each and every one of you as far as your high school experience goes.”

Continuing, he stated, “All I can tell you is this-Remember where you draw your inspiration from and never forget the lessons you were taught along the way.”

Dick concluded, “Oh, and now that we're out of high school, we don't have a prompt. We're free to write our stories however we like and it's your decision how it will end.”

After all the diplomas were awarded, Principal Coleman called the class president, Elynn Lee, back to the podium.

As Coleman turned the tassel from Lee's cap to the right to denote graduate status, the Class of 2012 followed suit.

After all the tassels were turned, the students listened as Antonn Briley, senior class secretary, offered the closing remarks.

Briley told his fellow classmates, “Even though I have prepared something to say, I feel speechless at the same time. Who would have ever thought the time would go by so swiftly. It feels as if yesterday that we were all so excited to move onto high school but in reality it was four years ago, or with my precise calculations, 1460 days, 21 hours, 13 minutes, and about 44 seconds, roughly, but who really keeps up with time anymore.”

He offered, “It has been a wild, stressful but yet fun journey. All of these memories that we leave Buckingham County High School with should be cherished, lessons learned should be spread, and friendships should last forever.”

Briley offered, “The start of something new brings the hope of something great. Anything is possible. There is only one you and you will pass this way but once. Do it right.”

Thanking all of the teachers, parents, family and friends for lending a helping hand to him and his classmates, Briley stated, “Without you all, I cannot even imagine how much more difficult this road would have been.”

Addressing his classmates, he shared, “Think of this as a fresh start. Go out and grab life by the horns-meaning live it to the fullest. Do not let anything or anyone hold you back from your aspirations, and remember to always dream big.”

As the sounds of the recessional filled the gymnasium, many of the new graduates threw their caps into the air and a collective shout of joy followed.

With diplomas in hand, the BCHS Class of 2012 was ready to greet the world.

CUMBERLAND – Funding for the bus transportation service provided to Cumberland County by Piedmont Area Transit is back in the... read more