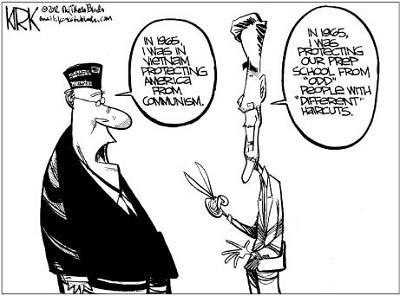 The Presidency Of Gen. Patrick Finnegan; Let's All Smile Together Because It Happened

When General Patrick Finnegan moved into his office as president of Longwood University in July of 2010 the very first thing he put up in his office was not any one of the dozen military medals he earned from the United States Army.

Not the Bronze Star, nor the Legion of Merit.

The thrice-winner of the Meritorious Service Medal placed a framed picture from Disney's The Lion King in his office first of all, a framed picture with two characters from the film, Simba and Rafiki-a lion and a mandrill-and four words:

“Remember who you are.”

When someone moves into a new home or office, the first thing they choose to place there so often defines them. There is symbolism that speaks from their depths.

That a retired General, former chief academic officer at West Point, and university president chose something from a Disney film seemed particularly revealing and entirely unexpected.

There was an utter lack of pretension about it.

And a child-like quality, in the very best sense of the word, that, were it undiminished in more adults, would make the world a better place. This proved true, in fact, given the enthusiasm in which he would participate with students in their Color Wars paint battles and similarly unstuffy activities.

The students loved him. Easy to see why.

General Finnegan wasn't trying to impress anyone with awards and framed testimonies of his academic degrees, as many people do when they move into a new office in a new job.

Comfortable in his own skin. That's what he was. Clearly.

And during the sadly curtailed time of the Finnegan Years on campus, he remembered who he was. He came in with Disney and in his final public appearance as Longwood president, speaking to graduates at commencement, General Finnegan quoted Dr. Seuss, and not for the first time, calling him “a great philosopher.” (And, of course, it was Dr. Seuss who said, “Adults are just obsolete children.”)

In the all too brief tenure of General Finnegan as president of Longwood, he certainly lived up to the four words, “Remember who you are.”

Moreover, he remembered who the people were around him.

During his first interview with The Herald, General Finnegan observed, “There's an old saying that the Army has, and I think it's a great one, and it says the Army isn't about people, the Army is people. And to me, in any job you're in, position you're in, the most important thing is the people that you're around and you're working with and dealing with.”

Longwood University is losing its president because of health issues and one must not fall into the trap of wondering what might have been had General Finnegan had ten years, not less than two, on campus. The twenty-two months are what they are. They cannot be changed. That is a good thing because they are, in fact, quite special. And so they shall remain.

General Finnegan will leave a lasting mark on Longwood and Farmville that will far exceed his time on campus.

Ripples are measured by the impact, not how long something remains on the surface of the water. President Finnegan's two years at Longwood are now part of the university's DNA and will remain a vital part of the institution, and its place here, forever.

What Longwood University becomes in 2050 will be based, in part, on what it became in 2010, 2011 and 2012 under the leadership of President Finnegan that began when he placed Simba and Rafiki, together with four words, in his office.

“Remember who you are,” he was reminded every day.

He did not forget.

And he will not be forgotten.

The entire Longwood University family-and this community-will remember who Pat Finnegan was, and shall remain, in the life and spirit of this place.

As Dr. Seuss most fittingly tells us:

“Don't cry because it's over. Smile because it happened.”

Editor, The Herald: I would like to say thank you to Randy Redd, Anthony Jackson, and the rest of his... read more