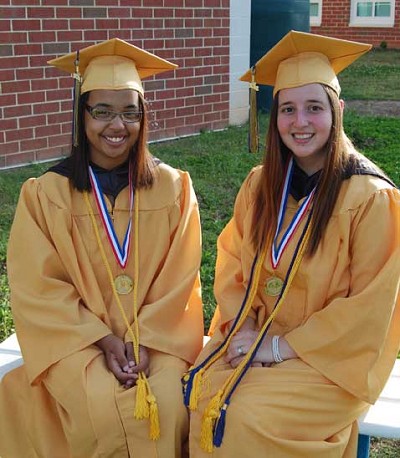 'See You When I See You'

CUMBERLAND – Cumberland High School's commencement for the Class of 2012 was on Friday, May 18. Cumberland County Public Schools Superintendent, Dr. Amy Griffin, noted during the commencement exercises that, “The Class of 2012 is a class of exceptional talented students. A class of leaders, teachers, healers, scientists, technicians, advocates, athletes, artists, musicians, and actors.”

Cumberland's Class of 2012 boasts of 117 graduates and 19 of those students are graduating with an Associate's Degree, 74 students with an advanced studies diploma, and 39 earning a standard diploma, she detailed.

On the school's record are 61 students who have been accepted into a two or four-year college or universities and eight graduating seniors are going into the military, according to Dr. Griffin, and others are going straight into the job market.

“The Class of 2012 has much to be proud of,” she offered. “My advice to our graduates is to dream big, persist, trust, and do it right.”

Valedictorian Rebecca Jamerson and Salutatorian Jasmyn Toney gave the charge to the class together-working as a team one last time.

“Well, you see, since about Middle School we've always been neck and neck in everything we've done,” said Jamerson. “We even scored the same on our PSAT. Jasmyn has always been first in the class and I was always second. Well, this last month, we found out that we'd switched places. Knowing that we've always been so close I couldn't stand up here and give this speech without her.”

Toney followed by offering her class a quote from one of their teachers-Mrs. Beloozerov.

Toney explained how she once told them, “That life's a shade of a big bird that's always flying in the sky and we're in the shade but slowly and slowly we have less and less shade and, then, one day the shade will leave us. That day has arrived and in a few minutes our shade will be gone…”

Jamerson added, “I'm not going to lie. There were times where we couldn't stand a certain teacher and used to wonder where in the world we'd use that lesson that they just taught us. Well, seniors, you're about to find the answer to that question. I'm willing to bet that we will end up using all of everything that our teachers taught us throughout the years.”

Toney later thanked the teachers and the school division's administration for “everything that was done for us.”

“Do not let this goodbye hurt you,” suggested Jamerson. “Think of it as a simple, 'I'll see you again one day.' Do not let the unknowns scare you. Go out into the world and achieve your dreams. Yes, this is a sad time in our lives but this is also one of the best days in our lives…I want you to promise that wherever you go in life that you'll go with all of your heart and do the best that you can.”

Cumberland High School's Principal, Jeffrey Dingeldein, took the Class of 2012 down memory lane and reminded them of the years spent in school before stating how commencement marks a closing of one chapter and the new beginning of another in the students' book called life.

“People are always the one factor in your lives that will make a difference in who you become,” said Dingeldein. “So I'm going to say in a quote from Weston Young, 'Every person you meet is wearing a sign around his or her neck that very few people know how to read. The sign has only four words on it. But 95 percent of those competing for the businesses don't have a clue as to what it says. The four words are 'Help me feel important.' So, as you move about in life, think about people and how you can help them feel important.”

He continued, “Tonight, you'll leave with a diploma in-hand and a world to conquer. It's all in how you use it. Take a moment to say to each other, 'I'll See You When I See You.' Let's don't say goodbye.”

On behalf of Cumberland's School Board, Chair Ginger Sanderson thanked the parents and family members for sharing their students with the school.

“I thank you parents that you shared your children with us so that we could help them learn throughout school but what you may not realize is that your child has left a mark here with us-the administrators, the staff, and our community here in Cumberland,” noted Sanderson. “Class of 2012, you may not realize it, but you have already started to 'pay it forward.'”

During commencement, David Meinhard, chairman of Cumberland's Board of Supervisors, addressed Cumberland's graduating class of 2012.

“I welcome the parents and friends of the graduates,” he said. “I'm familiar with your feelings tonight because a few years ago I had those same feelings of happiness, joy, and pride as I sat and saw a couple of my own children graduate from Cumberland High School.”

“We embodied hard work and achieved academic success and we became leaders,” offered Deane to his classmates about the flight they've been on. “We gathered at the airport we call Cumberland High School where we went through airport security, our class meeting. Then we moved on to the first flight, senior projects, where we passed with flying colors. In flight we went to all of our classes and around the world at prom. We departed on another flight at our senior night, which was tastefully done. For the past week we've been in layover. And now we are all gathered together for our final flight, graduation.

Alana Wood performed the special music during commencement. Cary Finn accompanied her on the guitar.

Wood performed See You When I See You by Jason Aldean.

She sang, See you when I see you

Another place, some other time.

If I ever get down your way

Or you're ever up around mine

We'll laugh about the old days

And catch up on the new.

Yeah I'll see you when I see you

And I hope it's someday real soon.

I hope it's someday soon.

I'll see you when I see you.

Cumberland's Class of 2012 has experienced joy and tragedy throughout the years in Cumberland.

A seat among the graduating class was saved in memory of Brittani Goodlett.

“Some of you experienced tragedies in your lives and lost loved ones along the way,” he said. “Whether family or friends. Three years ago, we lost a member of this class. Brittani Goodlett. We have reserved a seat in memory of her tonight. Rest assured that these people would be so proud of you at this moment. These are all memories that have shaped who you all are right now.”

Graduating from high school is definitively something for the students of Cumberland High School to be proud of and to the Class of 2012, “See You When I See You.”

May 17 – Happy Birthday wishes go out to Susie Taylor, of Dillwyn, celebrating on Monday, May 21; Kathy Midkiff,... read more