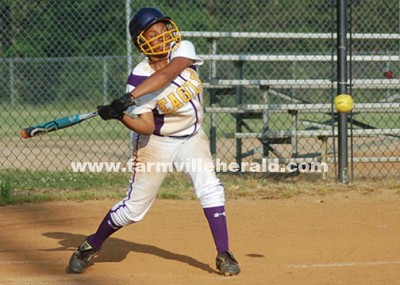 The Eagles cruised in both games, winning the first 15-2 and the second 13-3.

“We needed a couple of good wins,” said PECHS head coach Marvin Meadows, whose team has most likely cemented a third-place finish in the Southside District. “If we could beat Park View, maybe we could be in the thick of things, but they've beaten us three times. Rather easily, too.”

Prior to the season, the Southside District decided to forego having a conventional district tournament, and instead opted to have teams play one-another three times. With three losses to Park View, and a split with one game still to play against Southampton (Southampton swept Park View), the Eagles are on the outside looking in.

Disappointing? Yes and no. They're disappointed because they came up a little short, but that they got to within sight of a playoff, leaves them encouraged.

Realistically, the Eagles should be boasting that they have one of the best JV teams in the state. With seven underclassmen (five freshmen) in the primary line-up, Meadows tempered his expectations a little heading into the season.

“I'm really tickled to death with the season,” said Meadows. “Considering how young we are, I think they did very well. We still have to gel a little more, but we'll continue to make adjustments.

“You know, we have some players who I don't think they realize just how good they could be. If they do so, we will be very strong over the next couple of years.”

Meadows said that with the number of new players to the varsity program, it took some time for everyone to adjust, but maybe not as much time as he thought at first.

“Casey [Meadows] had to adjust when she came here from Fuqua, and over the year, they did that and have come a long way. I realize that they're adjusting to me more than I am to them, but they've done that.”

In the second game, PE faced an off-speed pitcher. It took a little while for them to adjust and to be patient enough to wait for a good pitch.

Playing as the home team in the second game, the Eagles (10-7, 6-4 Southside) were unable to get anything going offensively. It wasn't until the second time through the line-up, and after numerous cautions from Meadows to be more patient, that Prince Edward was able to slow down enough to make solid contact with the pitch.

PE scored seven runs in the top of the third. A double by Sarina Eames, and a two-RBI triple by Libby Reed seemed to settle down the Eagles, and rattle the Brunswick pitcher.

Prince Edward added five runs in the top of the fourth and another in the top of the fifth. Brunswick scored one in the bottom of the fourth and two in the bottom of the fifth, but for the most part, freshman pitcher Emily Roach was able to stay out of serious trouble. Casey Meadows picked up the win in the first game – one that was put out of doubt long before the third inning.

Prince Edward was scheduled to wrap up the home portion of its season on Thursday in a game that was to be played at Lancer Field on Longwood's campus. It has become a tradition for PE to play its senior day games on the campus. For the second straight season, Greensville was to be the opponent.

Eames, a shortstop, is Prince Edward's only senior starter.

“We'll have to replace her on both offense and defense,” said Meadows. “We'll miss her, but we should have everybody else back, so we have the potential to be very decent.”

Expectations have already been raised.